Spitvalves is a band filled of members and they play skapunk as they never have done anything else. Please check them out if it´s possible. Mikey from the group have answered some questions from me and here they are. 9th of may 2001.

History
-We started out back in 93' when our lead singer had just moved back down to
Florida after living in Georgia for a few years.  While he was up there he
had caught the Mighty Mighty Bosstones in concert and had the idea of
starting up a band like that with the  horns and the Rock N' Roll.  It wasn'
t hard to gather everybody up since we all went to the same high school and
had been friend's since before the existence of the band.

Is it difficult to have so many members in the group?
-Not really.  We've been touring consistently for the past couple of years
and we've never had less than nine people with us.  It would seem odd not
having that many people along.

I say in my review that you're more a punkska band than a skapunkband.  What
do you think about that?
-It makes sense.  Most of us in the group grew up on much harder music rather
than ska.  Some hardcore, some metal, a lot of rock n' roll and we like it
that way.  We love the energy and the feeling of being loud, screaming and
having a good time with it.

Do you care about reviews?
-They're fun to read and that's about it.

Have you ever changed anything after a bad review?
-Nope

What does the word punk mean to you?
-I look at a band like Fugazi and see what they've accomplished with their
music, their label and how they take on what they believe without a doubt
and that's what I think of when I hear that word. 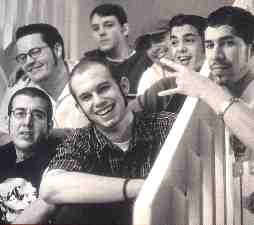 What do you know about Sweden?
-It's damn cold in the winter isn't it?

Have you heard any good Swedish bands worth to mention?
-I'm not familiar with music coming out of Sweden.  You should make me a
tape.

Is there any good bands in the USA right now?
-Yes!  Preffered 53, Avail, Nature Kids, Kick in the Head, Grand Buffet, Big
Wig, and I love Game Face.

How is it to live in the USA right now?
-The weather right now is very nice, there are a bunch of good shows coming
around, gas prices are getting more expensive, and people keep mentioning
how there's going to be a recession soon.  Ohh, and the cops around here are
still dicks.

How is a good concert with Spitvalves?
-Good question.  The best I can put it is that a good show happens when we
connect with the audience and feed off their energy and they feed off of
ours.  Sounds like a lot of feeding.  But, we live for playing out, that's
how we do it best.

Do you have any good contact with your fans, in which way?
-Yes, we're not rock stars.  We love hanging out and meeting people at the
shows.  It's more like making friends rather than making fans.  We all
benefit from learning from each other.

-You have your own website.  Is it important to have one?
Our website is at www.spitvalves.com.  It helps to have a website so access
to your group is easier but I wouldn't say that it's vital to a bands
existence.

Do you have a favorite site?
-Some of the guys like going to this raunchy site called Consumption
Junction.  I can't stomach half the shit on there.


First, last and most expensive record you have bought
-I think my first record was Michael Jackson's "Thriller"  Last record I
bought was the Peanut Butter Wolf "Devotion" 7".  Most expensive is I don't
even know.

Idols when you were small
-I always thought Tony Danza was pretty Rock N' Roll.

To be on Resurrection AD, is it good?  What's the best and the worst of
being on a small label like R-AD?
-The best part has to be the one on one contact with the people who run the
label.  If we have any ideas or concerns I can pick up the phone and call
who I need to call and vice versa.  Both the label and band know things will
get done the way they need to.  The only I have is that they better put us
on as the opening band the next time AC/DC goes on tour.

Do you read any zines on the net or on paper that you can recommend?
-The Onion.  The Onion rules!!!  You need to pick it up.  Abusters.

What do you think about the new way to communicate with email and internet
and all that stuff?
-So far so good.  I'm not very good with computers, but I love being able to
keep up with friends and family when I'm away.

How is it to be a small band in the USA right now?  How much do you sell
approximately?
-Being in this band is definitely a lot of fun, but it's not easy.  It
involves a lot of hard work, smelling bad, and dealing with assholes


What do so you say to a young band which is hoping to get a record contract?
Which are your advices?
-The most important thing is to not stress about it.  If it'll happen it'll
happen.  The whole point in being in a band is to enjoy it and grow with the
experiences that come along with it.

If you could choose five bands from the past and from now to play a concert
with you, which bands would you have chosen?
-Otis Redding
Beatles
The Police
Black Flag
Quicksand

Future plans for the band?
-Even more Rock N' Roll

Something more to add?
-Have a good night.I'm going to sleep *Mikey