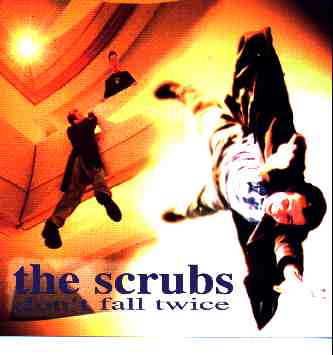 History?
-We were all in punk bands in high school. When high school was over, we
sorta fell in together into The Scrubs. Our sound has been developing ever
since. The band's been together for 3 years.

How is it to be only three in the group?
-It's soooooooooo much easier to only have 3 schedules to deal with, 3 bodies
in the van, and 3 personalities to clash.

Not any thought on a fourth member?
-Our style has developed into a one-guitar band. So we really don't need
anyone else.

Have you done anything before theDon´t fall twice CD? If you have, how
can I get it?
-We released a full length CD in 1999 called "Makin' A Mess." I will send you
a copy in the mail if you like. It can be mailordered from Nice Guy Records
(http://jump.to/niceguy).

How is to live in Cincinatti? And to live in USA?
-Cincinnati's a great town. It's a big city, but it doesn't have too many of
the downsides of most big cities. And i can't even imagine living somewhere
other than the United States. It's a very diverse place. If you visit, you
have to visit more than one place or you'll have a distorted image of what
it's like.

What do you know about Sweden?
-Not a whole hell of a lot. it's in Scandinavia right? don't they have some
sort of bikini team?

Have you heard any swedish bands?
-Once we played with The Hymans. They were a total Ramones ripoff but they
were really good. They also consumed more beer than i've ever seen a human
being drink at once. so if you asked them, they probably wouldn't remember
us.

What does you being compared with in reviews?
-We don't usually get compared to other bands, which i think is good because
it means we sound original. When we do, it's usually Alkaline Trio, Get Up
Kids, or Face to Face.

Which is the worst review you ever had?
-A local zine reviewed our very 1st demo tape and trashed it. they called it
"pop punk with young, whiny vocals and lots of whoa-oh-oh's."

Do you care about reviews anyway?
-They're nice when they give honest criticisms. Most of the time they don't
say anything helpful, just that they like it. But that's good too because it
gets our name out there in a positive light and if people trust the
reviewer, they can order the CD.

The name Scrubs, how did it came up?
-It came from a bottle of "exfoliating body scrub." it doesn't really mean
anything and quite honestly, we don't like it much anymore. But we're stuck
with it. It has NOTHING to do with the TLC song and it existed long before
that.


What is the most peculiar thing happened when you have been out and
play, on the stage or in the audience?
-That's a tough one since touring finds so many peculiar events. One time a
guy in the front row while we were playing showed us his penis. That was
pretty peculiar i guess. A band on the road is a recipe for crazy things to
happen. That's probably why it's so fun. If you ever have the opportunity to
take a road trip with a band, by all means do it. I promise you won't ever
forget it.

How is a good gig with Scrubs?
Are you play out often? where is best to play?
-We play out quite often. We tour whenever we can and we play locally a lot
too. Our best shows are at a coffeeshop in Cincinnati called The Buzz. For
some reason the shows there always rock extra hard.

You´re on Kickball Records , how come, is it a good label?
-When Kickball offered to put out our record, they were a brand new label.
But we were confident in choosing them because they really have their shit
together and most importantly, they're very good people. Kickball has a big
future ahead of it and I'm glad we're in on the groundwork.

What will you call your music if anyone ask you what sort of music you
play?
-I hate classifying music. But I guess i'd call it "emotionally influenced
poppy punk rock"

What is most important when you write songs, is it the music, the lyrics
or a good refrain which everyone can remember?
-All of those things are important...the music, a good chorus, and an
interesting structure or something unique about a song to make people
remember it is very important. I think lyrics are what sets great music
apart from good music. If the lyrics really mean something to the person who
wrote them, people can tell and they take the song to heart a lot more.
Nothing pleases me more than people singing along at shows with looks on
their faces like the words really mean something to them.

Do you have good contact with your fans, in which way?
-We are good about keeping in contact with fans. I think it's very important
not to get caught up and think that you're a rockstar. we're just regular
people like the people who come to our shows. I'd much rather have a good
conversation with a fan than autograph something.

How does the average Scrubs fan look like?
-Our fans cover every part of the spectrum. Some look "punk rock" and some
are "preppy" but i'd say most are just normal kids. Our fans all shower and
that's important to me. Nothing against crust punk, i'm just a germophobe.

You have an own homesite, is it important to have, who deos it?
-Yes. Our website is http://come.to/scrubs. I maintain it myself and it's
amazingly important. Not only can our fans stay up to date on band
happenings, but it's a great way for new fans to find out about you and
maybe listen to a sample song via mp3s.

What do you think about the new way to communicate, with email and
internet and that sort of things?
-It's a blessing. I still prefer to talk to people on the phone because i
think it's way more personal. But especially for people like me who are on
the road a lot, email is wonderful.

Is it any good bands in Cincinatti, in USA?
-Cincinnati has its share of decent  bands. In the USA there's probably a
million decent bands, but only a few of them really stick out to me as being
above the rest.

How is it to be a rock/punk band in USA right now?
-Punk always seems to have a scene. I am glad we're a punk band because i
enjoy the DIY ethic, the close relationships with fans, and the brotherhood
among bands.

Does small bands got any help from the stater which someone gets here in
Sweden with money and so on?
-you guys get money from the government?!?! that's no fair! To be a small
band in the USA means putting a LOT of your personal money into it. All in
all, it's really not a profitable venture unless you make it big. So you
have to love what you're doing to be in a small touring band like us.

What will you say to your swedish readers as a last word and wisdomword?
-Support your local punk bands. Go to shows. Check out new bands. Your scene
is there so support it. They are providing you with entertainment.

Which is the question you want to have but you never get, ask it and
answer it?
-No one's ever asked what you asked earlier about the most important part of
a written song. So good job!

Future plans for you and for the band?
-We're all in college (university) right now. We're going to keep playing in
and out of town whenever possible and keep recording new music with the
hopes that one day it will provide us a good opportunity to make music for a
living.

Something more to add?
-Thanks for reading this interview, especially if you have never heard of us
before. I encourage you to visit our website and check out an mp3. If you
like it, write us a letter or buy a CD. we'd love to get some Swedish fans!