History?
-Yeah,we came together 4-5 years ago and that was a time when we only drank beer in a undergoriundtunnel in Rimbo. We was bored of that and we came up witht he good idea of starting a band. From the begin we was five member but one of us decided to sport instead of being in abnd, Two of our songs on "The Saga begins" is dedicated to him, Manne Magnusson. He died tragically in a car accident two years ago. He is missed by many people. We continue to play and we came in contact with an american who wanted to do our band. He tokk Carl Templat to us and he recorded us and now we´re on Building 13 which is the result after the split of TKO and Chapter 11.

Please tell me a little about every member, age ,family and so on??
-Jakob, aka Lord Jake, aka King Jake, aka Judge Jake, is 20 years and he likes much football(hammarby) , aointof guiness now and then or only to take it easy with the lads. Which means football and another pint of guiness. He lives with his mother and his not so liked borther. He is known as the man with the orange kånkelbär(ask him with a beer some time so can you maybe get out some more) Otherwise there´s no big things about him. Maybe then ,as he would say himself: " I tell you, this body is a curse" then he is thinking he is to handsome and that he has a very fine body. Which makes girls coming around him in masses. It´s annoying,sometimes.

Robert, aka Righteous Robert, aka Bootboy Bob, alias Boosbap, is also 20 years and he is interested by football and he can take a pint of guines with Jake and he works in an electronicfabric and he is not afraid of the thought to make a real hit on his guitar. He lives, as the traitor he is, not in Rimbo anymore, and he has moved to Norrtälje ,to come closer to his work.
The biggest problem with Robert is the fact that he is not a metre high but through is knwoledge of illusions he can do so the world can´t see his height.....but that´s was back then..

Christofer, aka Chris da' Rockdocta', aka Chriffie, aka Gibson Chris,he is like the other ones, 20 years old and he comes to the south of Stockholm to see a match ,take a pint with Jake and Bob, and he can have time to meet his girlfriend also. He sits on the toilet at home and do solos which he later don´t remember. He have to improvise a new solo on our rehersals which he ´s doing very well. His dreams is to get a job on Arlanda when he is very much interested of putting on luggage on planes. A very big problem in Christoffers life is the size of his penis, which he haven´t any control on either and it seems like people always go on it when it´s lying on the floor. he haven´t understand the importness in this case.
Freddie, aka Sluggo, aka fittfreppa, aka Freddie the Head, 20 years, lives in his new house on the hill with his father and girlfriend. He doesn´t agree with the other guys about football and that Swedens best footballteam is spelled H-A-M-M-A-R-B-Y, and he is saying that a peculiar thing A-I-K, or something like that is the thing. The other guys doesn´t listen so much about it. Otherwise he plays floorball or is with his girlfriend. But sometimes he comes to the pub to take a beer with the guys but he isn´t so hard as the other ones and he´s ordering a Budweiser or something like that. In the last years we have noticed a christianty in his life. We can notice it in the fact that he is eating five o clock even if we´re going to rehearsal that time, he´s having his girlfriend with us everywhere ,yeah it´s christian in way.


How did you get a contract with TKO/Chapter 11, wasn´t it any label in Sweden which was interested?
-There´s no good labels in Sweden.Except Sidekicks maybe but they wasn´t interested so they can´t be so good. Carl Templar said that TKO/Chapter 11 was good and they was really big so it was no big deal about it.

You look like skinheads but I have understood that you´re the old type of skinheads, do you have to defend your opinions sometimes?
-First of all we must say that aren´t any skinheadband. Jake and Robert is skinheads but the other guys is more oi-bois. We play msuic for all oi-ers out there and we don´t care about the length on the hair. So please buy the record, and all you longhaired ones out there, don´t be afraid. We must defend the fact that we(Jake and Bob) as skinheads not haver any official opinions. Our opinions have nothing with our lives as skinhead to do. People have a little difficulty to understand that.

Why do became skinheads if you think about all "setbacks"?
- I like the way the lifestyle is, with clothes, music and so on. And then we´re a little tougher than everybody else and then you will show that.

How is to play this sort of music in Sweden?
-Yeah, as in Finland and Norway we can think. Sweden have the biggest oiscene per capita in the world, so I think it´s good.

Firts and latest record you bought?
-Jake: First one was Ebba Grön "78-82",and the latest was Clash "Sandinista".
Robert: Strebers "Till En Vän" was the first one and ther latest was two in all and it was  Templars 7":a "Lower  class brats", Live for
Today, Sham 69 " Hersham Boys".

Idols when you were small?
-Jake: Metallica, and every band on the Absolut Reggar-record.
Rob: NKOTB, Guns'n'Roses, Magnus Uggla.

How is a good gig with you?
-It´s good, fucking good.

How does the average Rightousfan look like?
The most ones are shorthaired, Dr Martens people but as I said, everyone is welcome.

Do you have good contact with your fans?
-Yeah I think so because we write back when they write to us.

Is it many interview, is it boring?
-It´s some interview yes. Some of them is pretty boring but this one is splendid.

Which is the quetsion you never get but you want to have, please ask it and answer it?
-Wow, that was good. That´s the question we have waited for. Hmmm,when we get it, then we have no answer. Which question do we want? Yeah, one of them could be. Question? Hello, I´m a bigbreasted nymphoman. Do you want to come with me home and violentfuck. You can come when you want. No, call me so I can come. Answer:Nja, yeah OK then. 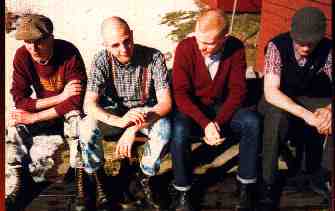 You sing about Expedition Robinson but you like,eh who wins this year, it´s maybe difficult and who don´t you want to see as a winner?,
-That question isn´t so difficult to answer. Buba must win or maybe the macho-truk. Hildeggard cannot win . We saw in the paper that she´s almost favourite to win. It´s a shame Sweden. We adore Robinson and we can sacrifice our lifes to let it go on. On next release Robinsoon Night Part II is going to be on it.

Is it a progroam you can be in?
-yeah,for godssake! if I would have a sexslave with me or something like that.

What do you think about all the documentsoaps which is on TV right now?
-Nothing, we only follow the original(But Molle in Baren is really tough)

Which is most important for you, a song with a refrain, the music or the lyrics?
-I don´t know, maybe the whole kit; a good lyric with a good melody with a singalong refrain. Like the most of our songs I mean.

What begins with the ...and the saga begins?
-The saga of four lads from Rimbo which was working from the bottom and conquered the world after a while.

Have you done anything more than the CD, if you have how can I get it?
-A 7" på Cranes Blases, which is coming in december/january, and some songs on a TKO-compliation called  "Oi! it's a wonderful world we're living in".Send a mail and we can arrange it.


Carl Templar have produced the record, was it like a drram, is a producer important and have he any thing to put into the group?
-It was a nice and funny exeperience in every way, not a dream but he´s maybe is going to produce our next record too. It can do something for the group if you have a good producer I think.

What does punk mean to youj?
-Party,fight and to live like a devil("Cutting") An attitude against the musicbusiness and some unity and much fun.

How is life in Rimbo then?
-It´s very dull I must say. It´s much watching video and to drink coffee and play Dreamcast and smoke and snuff and drink some beers and things like that.  och peta sig i naveln
och sån't.

What´s the best and what´s the worst with Sweden?
-Bäst: Our gloryful history, our nature and the big oi-scene.
Sämst: Climat, expsnsive beer, christian USA-wannabees which have the power in this country.

What´s the besta nd what´s the worst of playing in a band?
-Best All chicks, all gigs, to meet people, and to be creative.
Worst: To have epople which is saying what to do, and all these money which we don´t have no time to spend.

Futureplans for you?
-Jake: To make a union with scandinavia under swedish flag. To come out out from the European Community and war declare against them.
Rob: Nothing so much as jake, buy a new Sta Prest and get a funnier job.

Futureplans for the band?
-Out to play I hope. And to release a new record in half a year I hope.

Wisdomword?
-Don´t tie your shoes in your neighbours ricefieldt.
A day without blood is like a day without sunshine.
Don´t rely on a smiling Cirefalier.
If the enemies is foreward, please look at the sides.
If you want a beer, go to a pub..
You are your parents

Something to add?
-Thanks for a good interview. Very good if you must know. Unfortunealy could only Jakob and Robert be in this interview so it´s not complete. Good luck with your life and come to The Rightous gig in Gothenburg.