Boka from Ratos De Porao was so kind to answer my questions in january 2001.

You have been on the road for a long time.please tell me a little history of the group and and how many different members you have had?


Please tell me a little about every member in the group right now, age, family, interests, something bad a bout every one and so on? 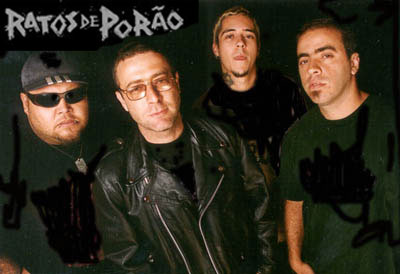 I have three records with you, Guerra Civil Canibal, Feijoda acidente?, and Anarkophobia, what have you done more and how can I get it?
- We have more than 10 albums already ,
Crucificados pelo sistema ( 1983 )
Descanse em paz ( 1985 )
V.c.d.m.s.a. ( 1987 )
Brasil  ( 1988 )
Anarkophobia ( 1990 )
Ao vivo ( 1992 )
Just another crime in massacreland ( 1994 )
Feijoada accident ? ( 1995 )
Carniceria tropical ( 1998 )
Guerra civil canibal ( 2000 )
sSstemados pelo crucifa ( 2000 )
Só crassicos ( best of ) ( 2000 )
You have been on Roadracer, Roadrunner and now Beat generation, why so many different labels and is it any more labels you have been to?
- The first 3 albums of the band were released by brazilian independent labels and then we signed with Roadrunner .
in 1996 the contract with roadrunner was finished and none of the both parts wanted to continue together .
so far we didn´t signed with any label anymore , we just give the permission ( license) for some labels spreaded all over the world like Beat generation / Munster in Spain or Alternative tentacles on the US to release our albums .
How does the brazilian punk/hardcorescene look like now, any good bands, many places to play?
- I think the scene is pretty good write now , we have tons of great bands in all styles and lots of D.I.Y. productions . good places to play and some overseas bands touring often .

How is to live in Brazil, is it many poor people there?

- The poor population here represent more than the half of te whole country and they live in inhuman conditions , this is not poverty this is sublife , they don´t live , just try to survive .
we have a kind of middle class that can still live in house or flat and can buy a car or a new TV .
To justify so much poverty we have the dominant elites of the country that are totally millionaire  .
politicians here get so fuckin rich in a such short time that nobody´s understand , so they stole the public money , it´s poved and everyday on TV , they go on trial , but nothing concrete happens and they are still rich .
also the big business man here that make their money stealing from the poor people anyway .
economuy is not so good and the social part is disaster , but aside of this we have beautiful beachs , beautiful girls , football , carnival , sun , cheap food and drugs , .... that makes brasil a paradise as people says ,
The childs who are out on the streets with no parents, have they been more or?
- Children lost on the street with no home or family is very common here and increasing everyday , hey grow up into the margiality and then it goes increasing theviolence and criminal life too , its a very complicated social issue to discuss and could take a days to get to nowhere , ...
What does Ratos De Porao mean in english?
- Cellar rats
You sing both in portugese and english why?
- When we were at roadrunner they asked us to record in english , so we always did two version for the albums ( portuguese and english ) ,
since 1996 all stuff is recorded only in english and are albums are still released or disributed worldwide .
it never soudn cool to translate lyrics and try to sing into the same song , it lost the powerful and with so much slang and lyrics talking about brasil some translations are meaningless for some people .
Which is the best to sing in?
- Portuguese defently , sounds much more powerful and natural .
Does politics and music goes along hand in hand?
- You can speak about politics in your music and try to share your toughts and experiences with the people ,
it sounds much more constructive .
We can´t deny that lots of people could start to change their way of living influenced by lyrics and stuff .
i think music could be a start for a social change one day .
Who do you think make the best politic lyrics in the world?
- It must be true , what you really think and have the wish to share it with the people .
if a lyric is intelligent , positive and makes you rethink and learn things that´s good .
i think we must right positive things for a better life than just say fuck the system and this is chaos and war and cos´of this the world is dead .
When you do a song which is most important , the lyrics, the melodies or a refarin that people can remember?
- The most important thing on song is to sound cool , we make the lyrics after what is important too , but the first is the music


Who does the music in RDP, all together or how do you do music?

- Basically all together
You did the CD Feijoada with many old punk/HC-songs, why did you do it and how did people take it?
- We are all fanatics for the music for a long , we also really like to play cover versions ,
I think people really enjoyed , that´s all good bands and good songs on the album , lots of classics and stuff


Which was the funniest songs to do?

- For me radio birdman , cos´ it´s totally different style of the music we play .

It´s fun to hear you sing in swedish, did you really try to do it or did you only come up with words when you did Spräckta snutskallar by Shitlickers?

- Gordo just pretend to sing the lyrics or maybe he took the lyrics from the 7´  it´s not difficult to pronounce your language  I really agree that i don´t understand nothing , but the sound of the words and the pronounciation is very close to brasilian language
What do you know about Sweden?
- I don´t know too much about your country , I think just music .
i think it´s a rich country , cold weather , i don´t know .
Have you heard any good swedish bands?
- I know lots of bands from Sweden and i think they are all great in al styles .
I like old stuff like Anti - cimex or Shit lickers and Mob 47
I like SkitSystem , Wolf pack , genocide SS , Randy or Mögel .
I also like like Starmarket albums , i apprecciate lots of different styles of music .
When I first heard you did play more hardrockstyle didn´t you, why did you change over to hardcore?
- I didn´t understood this question , maybe you are talking about the wrong band , we never played hard rock ,
in the early 90´s we used to put lots of bayarea thrash metal and crossover , but never hardrock


How would you describe your music to someone who never have heard you?

Have Sepultura make a way to other Brazilian bands?

- I think after Sepultura success lots of people knows tht we have good bands in brasil for metal or punk , altenative whtever , not only samba and popular music

Football is important for many brazilians is it so for you too. favoruite team?

- I´m not into football

How is to be manager fro the brazilian national team, you think?

Can you see anything which can combine football and punkmusic?

- No relation
What does punk mean for you?
- Think on your own

5 favourite records, five favourite concerts you have been to and five most important things in life?

- This is hard to say , your mind changes , I liked my first Fugazi gig , Seein´Red in the netherlands ( 1998 ) , Varukers with Olho Seco in Brasil , ....
favorite bands and records , i don´t know , I could say Poison idea - war all the time , Slayer - Reign in blood , Heresy - face up to it
most impotant things in life ;
1 - peace of mind
2 - health
3 - somebody to love
4 - be yourself
5 - respect
Is it many interviews, is it boring?
- Not too many interviews and don´t think it´s boring , but sometimes i hard to find time to reply them in time , I do lots of things together so...


Which is the question you want to have but you never get, please ask it and answer it?

- I never felt this way before , perhaps i don´t want to ask myself nothing at all

How is a good gig with RDP?

- When the crowd enjoy and goes mad !

Do you have good contact with your fans? In which way?

- For us band and fans are the same , we have good relation , I´m always together with everybody , have a beer and stuff

- I love e-mail  it helps us a lot with faster and easy communication ,
defently the internet is the best instrument to put all the people in contact ogether and do olots of things like organizing tours , promote bands , report scenes , ....
Do you have an own computer? Not so many have I think in Brazil?
- I have my own , but not too many people here have it
Any favoruitesites except mine then?
I Rarely surf on the net , i use it more for e-mail to get in touch with people and business , ....

You have an own site, who does it and is it important to have it?

- We have a site under construction , yes is very important to have it for people to know about your band any time , just click and see hat´s happening , you don´t need to wait for the next zine or mag to know about you favorite bands

How much do you sell approxiemately?

- I´m not shure , things go like slightin all the tme , maybe the best sell was like 50000 copies from the live album

- Work hard with my own label and distro

Which is the bands futureplans?

- Tour japan and US , make a new album

- I don´t know what it means