Why did you start to play again?

-On my 40 year party came the most of the old gang.  Stefan ”Stejmo” Hjelm-Klingborg said then why don´t we meet again and do some old songs because I have a rehearsalroom so it´s only to play anytime. Sure, I said and laughed. The last time we were on stage was on Ritz 1985. But after two weeks have I phoned around and get some people who are in this group right now.Peter Wahlberg on bass, earlier in Cathy and the Heat and La Crosse, Thomas Gabrielsson on guitar which was a guitarist in La Crosse and is huitarist in Tequila Girls, Stejmo on drums which was in the band in 1977 and he has been in Janne Anderssons(big brother to the politican Mona Sahlin) Japop and myself on vocals and guitar.

Why did you quit when you did?

-We didn´t came any further at that time. Janne Andersson quit because he wanted to have JAPOP and Stejmo went to him. Staffan made himself impossible to the people you don´t should be impossible with. I didn´t think it was any more to do with Pain then so I decided to play with Matte Persson and the other people in Berlin, Janne Lundberg and Uffe Erlandsson. Their singer Micke Hedenby was doing his military thing and then we wanted to come out and play so we began to have the band Death Trip and we did mostly covers.

Please tell em alittle about every m,eber, family,age and so on?

-We are ordinary guys who wants to play music simply, and the youngest one in The Pain is 38 years old so we´re not any kids anymore.

Is it more fun to play nowadays or was it more fu  before. What´s the difference with playing nowadays if you compare with the old days?

-It´s much more fun to play nowadays. You have no demands, only play and see if it happens something. We have done a demo-CD whichwe send around to people and then we will see if it happens something. The difference is that we can play our instruments better and that we are sober when we play and rehearsal. It gets so much more effective that way.

You didn´t put the music away ,you continue with Chatterbox, what happend with them and with you musically? 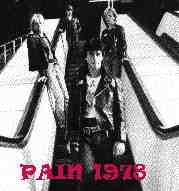 Can Chatterbox made it to Cd sometime?

-Oh shit...it´s some old cassettes in a studio in Rågsved somewhere, but we can´t do any CD of that or....?

What did the other ghus do after the split with Pain?

-As I said Janne and Stejmo was with JAPOP and I did Death Trip and Staffan grounded B-Films but they didn´t was around for so long. And in the end Staffan was a punk or a new wave kid taken from a french paper.

You have done a demo CD now, it´s more heavyness than fastness, why are you too old to play fast(I`m 37 myself so I know)?

-Of course we´re too old, it´s so fuckin tirering to play fast. No, jokes apart when all band starts their career so are you more hungry and then it´s more easy to play fast. Check out every band in the beginning of their careers, Beatles, Rolling Stones, Clash, Ramones and so on,  now it´s no old guys who can do that anymore, even if its´very fun to play fast.

What does punk eman for you, what have it taught you?

-Punk for me was a new sort of musc, a fast music, tough attitude and a way to look which was driving people crazy. But what the hell, it´s the same thing today, the older pople can be crazy on the younger ones. Everything have it´s time in the musicworld. It´s a type of recycling but some old guys is on the road for long....hahaha.

No thoughts of releasing the old stuff on CD(you did only two singles or?)?

-Yeah, we released two singles, an Ep and one single. If we do anything with the old material it must be on a new recording. can be fun if we do it, we will see.

How have people meet you nowadays?

-It has been very positive from all I have heard from.

How does your audience look today?

How did your audience look back then?

You were seen as some sort of glampunks in that time or how was it, was it much fighting against the punkgroups?

-I know it was two sorts of punkgroups,one cccp-punk group and one we don´t care about anything group. we was in the later one. We didn´t care about anything and played and we was very hard to work with I think some people thought. CCCP -punksters was in Oasen i Rågsved and does the politic thing and we other punks was in Gallerian in the city.

How is the music life in Stockholm, Sweden today

-It´s very good if you think about the music but it´s very sick if you how few places it´s to play on. Thank you to Micke and Larsa who have the rockclub Clampers on Ringvägen in Stockholm, there can every band play. More clubs to the bands.

Is there any good bands?

-Yeah, it many good bands, one of the better is The Pain.J

The first and the last record you bought?

Do you buy many records, which is the most expensive record you have bought?

-No, I don´t buy many records, unfortunaly, the most expensive I have bought I don´t know but the hardest to find records I have is a gateoutfolder record with Beatles, Magical Mystery Tour.

What are you thinking about the new way to communicate with email and internet and all that stuff?

Where do you stand in the Napster, Mp3 thing?

-If an artist is putting out his own thing in Mp3 is it OK for me but if any other poeple put out the artists things on a wwwsite and then sells his products it´s wrong. Beacsue then the artist don´t see any money, then it´s fucking wrong.

-No, I try to be away from the computer as much as I can( except from now then)

Do you have an own website, if you have, who does it?

-Yeah, we have an own website and it´s the guitarist in The Pain who have done it, but it´s not OK right now but then it´s going to be some pictures and some mp3 songs there.

Whats´the best and what´s the worst of living in Sweden?

-The best of living in Sweden I can´t come up with but the worst thing is our bad politicans.

What can we do to the worst things?

-Vote them away, and take the king back(hrmm,yeah,yeah)

Where do you stand politically?

-Civil disobience is the best I know and if it was a party called Anarchy and Chaos I would vote on them.

When you write music, which is the most important,the lyrics, the melodies or a refrain that people can remember?

-The lyrics is more and more important for me, music and to do a refrain is pretty easy but to do a good lyrics is difficult, I don´t know how to do it yet, buit soon maybe.

Which of your old songs wants people to hear?

-We don´t give than any cahnce to wish theor songs, we only play as fuck when we play.

If you could choos five band tomplay with and so Pain which five would younlike to play with?

-Beatles, Elvis Presley and....I don´t can come up with some more..

-I don´t like interviews so much but I´d rather give them to smaller zines than to bigger papers like Expressen and Aftonbladet. In that papers it´s only gossip and shit to read about.

-I don´t want to have it, can´t ask it and therefore I can´t answer it.

have you speaked to Peter Tägtgren ,who have the right to the name The Pain?

What is the futureplans for the group?

-We continue to play and then we see what happens.

-Recordcompany, megahit, World Tour, 10 bikes, 5 houses…no I have no idea and we will see what I come up with.

-If you only say the truth you have your back free..

-Please come on our gigs when we´re around. And thanks for all the questions you had. Good luck with your site www.surf.to/skrutt .