Benjamin in Nine have just arrived from a tour with Haunted, Nine and Nasum and read what he thinks about that among many other things in april 2001.

Some short history?
-Benjamin: We started the band 1994, we have released three fullengthrecords and some other things like cd-singles and split cd´s. we have toured with bands like Entombed, The
Haunted, Nasum, Frodus and many more bands.

Please tell me a little about every member?
-Benjamin: I´m 27 and I´m the typical slacker. A lazy sod with other words. Right now I´m out of work. Johan is the guy who´s not take any booze but he is as wild as the other in the group when they drink. He works as a booking agent on Luger. Tor is an ambivalent guy which have the role of dad in the group. He works at Thorn as an IT-nerd and he has an own studio.  Linkan is the coolest one and he likes to take things soft, and right now he´s cleaning. Karl is a question mark, he´s a student.

You wre on a tour with Nasum and Haunted, how was it?
-Benjamin: Very nice guys and very nice places to play, very good conditions. A really brillaint tour. Fucking fun!

What is the most peculiar which have happened on stage or in the audience on a gig with you?
-Benjamin: Wow. I don´t really know but on the latest tour Johan got nosebleed in Gothenburg and it was dom deathmettalic boys who began to lick it up. That was a little weird.

To have a short name like Nine ,wasn´t you afraid that anybody else would have the same name?
-Benjamin: No. 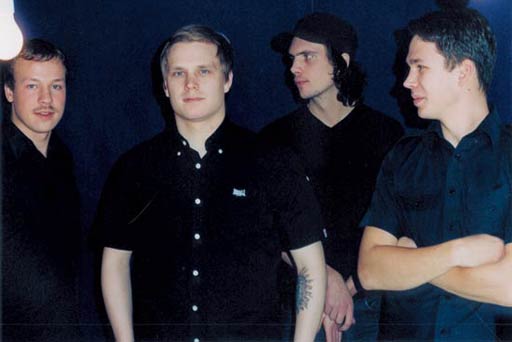 Why Nine?
-Benjamin: I have no idea. No stronger meaning. We hadn´t any name and then we came up with this.And then we understand that we don´t care what we are named because isn´t the name who is important and reprasentive for us , its´the things we do.

When you began to play straight edge was really big, I konw that you don´t call your music SxE but it sounded so in the beginning?
-Benjamin: Oh? we have never been any SxE band even if some people have thinked so. Hmm. In the beginning I can understand that we sounded a little bit like Snapcase and so. But it was only the first MCD which sounded that way.

How have you changed from the start?
-Benjamin: Vi have been focusing in the more rockier parts in our music. We try to do a little easier things than you can hear on "Listen"

Do you think your music can change anybodys life?
-Benjamin: I really hope so because music have changed my life very much. So mif anybody like the things I write in my lyrics so maybe you can make people think.


How is it to live in Sweden?
-Benjamin: Sweden is a safe country, in both good and bad ways. I don´t wanna live here when I get older.

here is the most usual records with Nine.

Whats´the best and the worst of living here?
-Benjamin: See above.

What´s the ebst and what´s the worst of living in Linköping?
-Benjamin: I´m the only one who´s living here in Linköping,  the other one´s lives in Stockholm. But I like Linköping, it´s maybe to little to do.

Is there any good bands in Sweden today?
-Benjamin: Entombed, The Haunted, The Firemark, Idyls, The Hives. is that enough?

Burning Heart after Startracks why just Burning Heart? Is it good?
-Benjamin: yeah of course, Burning Heart is cool. They help us out much. But everubody who works there have heavy feet, so it can take some time to do things in the normal life, like going on the toilet and so.

No bigger company which have phoned you or something like that?
-Benjamin: No not bigger than BHR, but they are really huge aren´t they.

How is a good concert with Nine?
-Benjamin: We´re tight, we´re happy and we dance together and have fun.

Do you have good contact with your fans, in which way?
-Benjamin: We always take the time. We don´t think we´re better than anybody else and we´re so fucking glad that someone appreciate us. If anybody want to ask something or only talk to us a little, are we surely more ahppy to it than they are.

Politic and music, goes it hand in hand? Why or why not ?
-Benjamin: If people want to preach through their music it´s OK for me. I don´t do it so much. I only want to say to people that they must think for thereself. It´s many bands who do thier gigs to a big revival meeting. I don´t like when bands put their opinions down to the throat to people even if they have a good thing to say.


is it important for a band to take a stand for things like playing on an antiracist thing if they think the same way ?
-Benjamin: Do you have any brain at all must a band be on an antiracistthing. It´s important in this respect you must try to help out and get rid of that  social problem and ignorance. If you can, you should do.

You have an own website, is it important do you think?
-Benjamin: Yeah, it´s important. There can we tell people who like us what´s up. We can answer letters at once and we can spread our music in an alternative way. If I got as I want the record had been out on Napster 24 hours a day.

Any favourite websites?
-Benjamin: Napster is the best thing on the net.

Who does the music in the group, are you all writing or how do you do it?
-Benjamin: I and Tor make all music. I write almost all lyrics and Johan writes a little.

What´s the most important, to have a good melody, a good lyric or to have a refrain that people remember?
-Benjamin:Music means a lot to me, because we are such musiclovers. I and Tor makes the song first and then we put some lyrics to it, already written or after the feeling on the song. But the lyrics are really important too.

What means punk to you?
-Benjamin: i´m the only one in the band which have had a jacket with studs, and a bag with beer and mohawk. This was around 1988 or something like that. The punk changed my life and my way to live and think. Punk is gold. Yeeah!!!


Which are your futureplans as human beings and as a band?
-Benjamin: As a band we´re trying to play as much as we can.  As persons I don´t know, I will never know what to do with my future. I´m living in now. It´s both good and bad to do that.

Wisdomword?
-Benjamin: if it must be wise it´s best to be careful what to say, so I say "think for yourself"


Something more to say?
-Have fun. Be as happay you can be. Don´t do anything you don´t want to do. Now I must stop before I drown in the clichees. have a good time!