Parry from the group phoned me up an evening in march 2000 and we talked in 30  minutes about everything you´re going to read down below. Please continue read and I hope you like it. 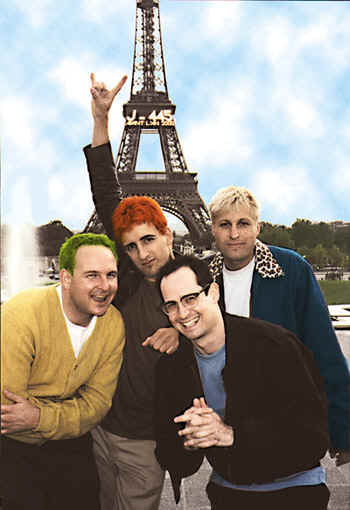 I asked Parry when they started the group and  he told me that they started it in a garage in Santa Barbara some years ago. They have a friend called Joey and he is singing in the group Lag Wagon. He started a record label and he wanted Nerf Herder to be on it. They did a record which was fast and cheap. A song from the record called Van Halen became a smaller hit on the american radio. The big record company Arista phoned them up and buy the record from Joey´s label. They gave Joey some money and the band get some money.- We were much on MTV and after a while we wanted to do new songs, says Parry. Arista didn´t like the songs and we get fired. We went home to Honest Don´s and we asked Joey if he wanted to produce our record. In this time we also lost our basist but we got a new basist and a new guitarist.

The first record came out 1996 and after that they toured a lot with bands like Weezer and and Bloodhound Gang. The two new members is Dave(guitarist) he is a guy they grew up with. Justin is the basist and he knewed the Weezer-boys and that sort of guy must be good they thought.       Honest Don´s is a very good label thinks Parry and they push on their bands a lot. de are polite and very friendful and that is a important thing that he like. -The difference of the two label is that Arista didn´t understand our type of bands and Honest really understand our music. Arista thought we were another band and they get disappointed.

They are very stafisfied with the new album How to meet Girls even if Parry always are tired of a new thing they´ve been working with for a while. It´s five girls on the cover and they seems to be taken out of a seventiiesdiscomovie. I wonder which in the group who gets two women. -Those girls wouldn´t even talk to us. we´re not getting any girls,Parry laughs.

Nerf herder is a peculiar name but he says to me that is it a line in the Star Wars movie The Empire strikes back that have the name in it.

How does the average Nerf Herder fan look  like, Parry says that he is very skinny, sometimes very fat, many girls, shy girls. The guys have glasses and they are not cool.      They haven´t been out and played gigs for a long time but now they´re soon on the road. They´re going out with Bloodhound Gang for a six weeks long tour. They have only been two times in Europe and played, it happened in Madrid and in Paris.

But they hope they can get it to Europe in the summer of 2000. Parry thinks that they have good contact with their fans because they answer every single e-mail that comes in. - It´s more difficult with letters because we haven´t anywehere to send them. I think it´s good with e-mail beacuse it´s easy to answer. But sometimes it goes to fast. When you send a common letter it takes a while before you get an answer and it get more interesting. We have an own homesite I want you to check out www.nerfherder.net .

When I ask Parry what he knows about Sweden he tells me that he loves Cardigans. What doen a american citizen think about when they hear the name Sweden. Really really blond sexy girls. They also think about snow and skiing. Parry doesn´t mix Switzerland and Sweden because he has been in Switzerland and he knows that isn´t Sweden. He doens´t know many bands from sweden except Cardigans. -You have many black matelbands over there haven´t you, he says. Isn´t Cradle of Filth from Sweden? Entombed is a band I have heard of. Millencollin is very popular over here.

How is it to live in USA? Parry likes it a lot, especielly to live in Santa Barbara but it´s very expensive over there. If you want to rent a flat or a house it´s amzing high rates. The gasoline is expensive in Europe but it´s very expensive in America Parry thinks. The political climate is better than it was before. The econmy is much better than in years. The chance to get a job is better than in years.  Parry works in a flowershop, Steve works with T-shirts which Parry likes, he does Nerf Herders T-shirts. Dave works in a clothshop and Justin used to work with music equipment. When I ask Parry if they don´t live on their music he laughs.- But if you write a really good review in your zine we maybe can live on our music after that.

It´s many good band around USA right now says Parry and he talks about NOFX, Lag Wagon, The Mutts but here many awful bands coming from Santa Barbara, all those hippieshit says Parry.   Nerf Herder have been doing songs about Van Halen and Pantera and I wonder if Parry likes the bands. He has been doing it but he doesn´t listen to them nowadays.  He writes the most of the songs in the group but his favoritesong on the new album Pantera Fans in Love has Dave been written. He also wrote the song For you.  Parry thinks it´s more difficult to write songs nowadays than before but he thinks it´s because he´s more lazier nowadays. He thinks it´s very important to have a chorus in their songs even if some songs can be good without a chorus. - But I think if you want to have the audience to sing along you must have a chorus.

The reviews on the new records hasn´t been so many yet but the one that he has been reading has been good. Maybe it´s so that folk doesn´t show him the bad, he laughs. - It´s very funny because our friends in Bloodhound Gand relased their album and they get very bad reviews in Spin Magazine and in Rolling Stone. It felt like they were hating the group. But the record have been sold a lot. So the reviews didn´t get people not to buying the record.

They are compared with bands like Weezer, Green Day, sometimes they have been compared with NOFX, Parry thinks it´s a little bit peculiar because NOFX plays so much faster.  Punk means a lot to Parry and he says that he likes the old groups like Blitz, Ramones, Avengers and other old groups. He thinks that punkrock is a lot different if you compare with the newer stuff like Lag Wagon and NOFX. -I love NOFX but´s its so much difference if you compare to the early punkstyle. The early punkstyle sounded more sloopy and more aggressive. You don´t have to be a good musican to play musik. Nowadays punk is about being a good musican and play songs that are more complicated if you comapre with old punkrock. But I like both styles very much.

Perry is old he thinks, He is 32 years old and the other guys is about that age too. They have no families but they all have girlfriends and Dave is even married!!!. But they haven´t got the chance to have any children yet.  I wonder what his advice is to new bands who wants a record contract and he says -Don´t do it, don´t try to get a contract. If you do the company can get you where they want. Bands like Lag wagon and us played our own music. You maybe don´t get a contract but don´t get very disappointed if you don´t get a contract. I think when bands get a contract they sound like shit.

It has been some interviews the latest time but it doesn´t bother Parry beacuse he likes to talk about the group. He don´t think it´s boring beacuse the rest of his life is very boring so he thinsk an interview is very exciting. Which is the most frequent asked question then? -When we´ve done our first record and the song Van Halen was on it we got many questions about Van Halen. They asked us if we knew Van Halen, how Van halen is, and when they are going put out a new record. Not many questions was about Nerf Herder. I don´t mind talking about Van Halen but I wouldn´t buy a new record with them.

When he was young his idol was Angus Young in AC/DC and The Six Million Dollar Man -It was Steve Austin who was an astrounaut and he crashed. Ha was froced to get a new leg, new arms and new eyes. He was half a man and half a robot. He was a big idol for me and I wanted to be half a robot half a man.

When he was a little boy he listened to Beatles but groups like Devo and other new wave bands was music he listened to. The first record he bought was Styxs record Grand Illusion. The latest he bought was a compilation with Seeds. He get many records for free and some of them was NOFX-Decline on vinyl which have a bonussong on it. -I bought the new Bloodhound Gang record but I already have one, but I like to support them. I even sing on the first song so if you hear some out-of-tune singing ,it´s me

He collects vinylrecords but he doesn´t buy any expensive records. It´s most 1 or 2 dollar records he buys. But he have a expensive Elvis records, Elvis Greatest Shits with Elvis bad songs on it.  Their futureplans is to tour with Bloodhound Gang and to play discomusic and be played on MTV every day. -I hope we come to Sweden and tell Cardigans to be prepared. We can play with either Cardigans or Entombed.

Thank you very much Parry fpr a very good interview and it was very nice to talk to you.