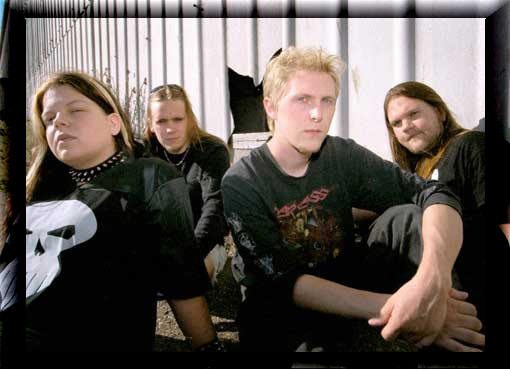 I want your whole story, everything?????

Mimikry was started by Hjalle and Heavy(guitar and drums) when they realised that they wanted to be tough punks. This was 1993. Åsberg came in after a while as a basist. After a while Hajlle and Åsberg changed instruments because of that Åsbergs fingers was getting bigger because of the bassplaying. Hjalle was not so good at play bass and sing in the sdame time so therefor Jonas Nyberg came in on bass instead. Hjalle played then guitar and sang for a while but soon the guitar was on the coach. 1996 Jonas moved and then Mia cames as a new basist. That´s the story but the whole history from Hjalles point of view is on our homesite.

Please tell me a little about every member, family, age and other dumb things which have happened?

Lives in Sollentuna and in Dala Floda .

After a gig in Karlstad so explained Åsberg to E-Type that E-Type was Dee Snider?

Live sin Björbo with Mia and the cats Trixie & Dixie.

Heavy and his friend Ryttarn (drummer  in Dökött) competed in their young years about who could shit the longest and they was sitting in a wheel. Ryttarn won.

Lives in Borlänge with His girlfriend Karin and the guinea pigs Bimbo and Larry.

Hjalle have once dived into the water right front of a motorboat and he succeeded with the thing to get the propeller in his head and it was an Evinrude.

Lives in Björbo with heavy and the cats  Trixie & Dixie.

Mia have managed to drive her lost with the car and get completely lost in Gothenburg for five hours.

Is it a little boring with the Hjalle and Heavy thing?

Nowadays it´s calm on that front. Of course it´s a little boring when the audience thinks that is Hjalle and Heavy who´s going to play but it´s often wrong promotion of the promoter. And then Hjalle and Heavy don´t regret the whole thing.

Whats was the best and what was the worst with that they were in the program , for the group I mean?

The best with that they was in the program "På Rymmen" was the thing that they were in it. And then it was not anything worse with it. It gave Mimikry a really good chance to coming foreward.

What have you done except the single 500 mil and the CD Automatiskt? How can I get it?

Some demos and we have been on some compilations, for example  Definitivt 50 spänn vol. 9, Punken e´ död – NOT, Äggröran 3, Hjalle & Heavy – På Rymmen and so on. Some of these record can you get in stores and some of the things you can´t get any more.

Why Birdnest on this record?

We get in touch with Birdnest, and both we and them wanted  to do a record.  Mimikry haven´t have any contract before the record ”Automatiskt”.

How does the swedish melodic trallpunk lives today in sweden then? Or shall I say punk in general?

Punkrock isn´t so big nowadays but there´s time to change it maybe?

Good music and a view of life. And thne there´s always extremists like in any other style that isn´t so good.

I understand that you do lyrics which you mena much with, it´s mostly Hjalle who does them but do you stand behind them as well?

Yeah, we all stand behind them. Hjalle is a really good lyricwriter so they don´t get too serious but not too unserious either. Nice lyrics which suits fine with the rest of the music.

Which is most important with a punksong do you think, that it is a good lyrcs, or that is a good melody and refrain?

Åsberg: That the whole thing goes together well.

Hjalle: Is important both with lyric and music when you talk about swedish music.

Mia:In swedish punk is both music and lyrics important. Maybe a little more important with the lyrics because it´s mostly that which decide if a song is good or not in my ears.

Heavy: The music is most important then there´s some other songs there lyrics is bad so you don´t like the song.

The idea with having Birdnest label manager Per Granberg on the photoautomat , how did that idea came foreward?

We thought it was a little humour. He don´t suits in there but it was very fun.

What is the most peculiar which have happened to you on stage or in the audience on a concert with you?

It wasn´t so funny, but it was a happening which we all remember when our friend Pekka(bassist in Dökött) sat down on the firingequpiment so all firethings was put on in the same time. The explosion almost burn a girls eye but we were lucky so she wasn´t burned. 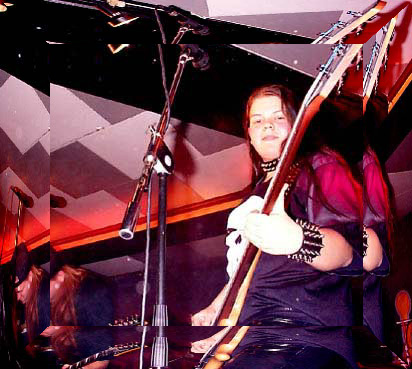 How is a good concert with you?

Much people and a fucking good feeling, then we´re best and then it sounds good too.

A girl/boy with good musictaste.

You get reviews of different kind, which is ther worst one you have? Do you care about it?

Of the negative criticsim we surely have cared more about if we haven´t been in the Hjalle and Heavy thing. It´s made us used to get bad reviews in big papers. The negative critiscism is coming off really fast.

The positive critisicm is fun to get.

The single 500 Mil was reviewed in Aftonbladet by Håkan Steen some weeks ago:

Proclaimers old "I´m gonna be (500 miles)". In swedish, in punkversion.n.
With Hjalle & Heavy. yeah, Mimikry is their band and as you understand this smells
shit long way. They´re not satisfied to murder an old folkpoppeatlsong
completely ,no they put that out with three own compositions which are like a brood.
It´s fucking out of talent.

Have you ever changed anything after a bad review?

Nix Pix Lingondrix, or nicks picks lingondricks it´s which way or another…

Åsberg: It could be worse.

Hjalle: I really don´t like the autumn and the winter, but the sommer and the spring is good and these are warm and I´m on vacation.

Mia: I have difficulty to see that it´s any better country than Sweden somewhere.

Heavy: I´m really satsified, cold winters and nice summers. Could it be better.

Whats best and whats worst with it?

Åsberg: Don´t have a clue.

Hjalle: I haven´t tested any other country, but the badest thing it´s the winter.

Heavy:  Snuff and that it´s not sa many dangerous animals like snakes and giant spiders and that things, its´the best thing with Sweden. There are nothing bad with Sweden.

All these documentaryseries on TV, what shall we do with the shit?

Åsberg: I don´t watch the shit so they can take it away.

How about the rascism, what shall we do about it?

We couldn´t come up with a good answer so we can´t answer it?

Is music and poiltic going hand i hand?

Music is a good way to make people think. Politic and music goes hand in hand but it have been to much if every artist singed about politic. We need bands like  Dr. Bombay and the Sisters Graaf who don´t sing about politics.

You ahve an own website, are you satsified with it and who does it ?

We have an own webiste, yes, Hjalle have done the layout, Åsberg have done the programming and Mia nad Heavy does everything to came up with ideas. Åsberg is the man who updates now and then.

Any own favouritesites on the net?

Now ot politic again, have you done your premiopensionchoice yet, what do you like that you can choose warindustgries without knowing it?

Åsberg: I haven´t made my choice yet.

Hjalle: No, I haven´t made my choice yet and I will not do it either. I hope that I don´t support the warindustry.

Mia: Yeah, I have made my choice. I haven´t any idea what I support because that I don´t engage myself in what I´m chosing. But I hope I don´t support any warindustry.

Heavy: Yeah, I have made my choice.

Where do you stand politically, or do you don´t care?

Åsberg: I don´t vote, I don´t give a damn about it

Heavy: I don´t vote, I don´t give a damn about it

No. it´s not so many interviews. And when it is they not boring.

VWhich is the question you want to have but you never get, please ask it and answer it?

Hjalle, Heavy & Mia: Noone can do any better question than Åsberg so we don´t say anything.

Why do you plays music, what drives you ?

Åsberg: I play music because it´s fun. I haven´t anything better to do.

Hjalle: I like to lift big amplifiers and it´s tough to be up late night.

Mia: it´s fun and relaxing and you learn new things every day.

Heavy: What the hell should I do else?

Mimikry where does the name come from?

Heavy saw the word Mimikry in his biologybook in high school and thought it was cool. Mimikry means: Some defenseless animals protecting likening with more fearing animals.

What do you want with the band in the future?

I hope we can live on it.

Which are your own futureplans?

Hjalle: I don´t plan so much. It will never be the way you thought, I want to live in Spain sometime..

Hjalle: Stand on you otherwise somebody else do it.

Heavy: More folkrace to the people

Something more to say?

Mia: Yeah, in that case Långt ner i halsen with Linda Lovelace…