-The whole thing started as a recordingproject summer  97.We recorded two demos - 'Vol. 1' and 'Vol. 2: Tour & Turtle'. I (Nicklas Andersson) - guitar, bass and vocals , Jörgen Andersson - vocals, Daniel Gustafsson - guitar, keyboards and bass, Emir Horozic - drums. In the end of 98(after that friends have said to us) we send out some CD-r demos, ten or something. We get a contract immediately. Even Man´s Ruin was interested. Eric on Music Cartel was very interested and he really wanted to sign us. After some weeks with The Music Cartel quit the drummer Emir Horozic and started to study on highschool. And in the spring 99 I started to drum and Kalle Berlin took over the bass. After that everything have been going fast. Our debutalbum was released in august last year and the new record Noara dance came out some months ago.

Have you been in any other groups before and do you have any groups beside of Mammoth Volume?

-Kalle plays in the punkband Scensur (where I was been in also in the beginning of the 90´s) and with Lam Cham. Daniel was the frontman in the band Ommadawn three-four years ago, where Jörgen sang and I played drums for a short while. Notice: Jörgen began his singingcareer in the band FKÄSKET BRINNER in the end of the 70´s . 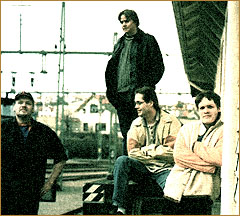 -Jörgen "Aston" Andersson - vocals/care-taker: 38 years. He is a devil to sing and ....HIGH! he is also known as the amateursurgeon. He is out on the net very much. Likes:Black Sabbath and Kyuss. Dislike: Betales documentaries and fishbuns.

How did you came in contact with This Music Cartel in New York?

-I looked at Meteorcity's linkside of recordcompanys. I thought TMC looked interesting and send a demo CD´r to Eric.

VSeems it to be a good company?

-It´s OK, we haven´t something to complain on. Eric is a nice guy.

I have never heard of you before ,have you done any records and if you have how can I get them?

-We released our first record in august 99. You can get it everywhere. Please check our homesite for information.

What do you think about the desription as a stonerbaband, isn´t really right?

I can think that your influences is in the early 70´s?

Is there any good bands in Sweden right now? Outside Sweden?

-In Sweden there´s lot of good bands like  Anekdoten, Bob Hund, Dozer, Lowrider, Demon Cleaner, Spiritual Beggars, Half Man, The Awsome Machine, Astro Queen  to mention some. Outside Sweden we haveQueens of the stone age, Unida, Atomic Bitchwax, Solarized, sHEAVY, Fu manchu and so on.....

What do you think about the musicscene in Sweden otherwise?

What do you think about living in Sweden?

-It´s OK, but I want some more warmth.

What can we do better here?

-We can try to anti-americanise a little.

Mammoth Volume ,what a fucking name, where did it came from?

-What a fucking name.Only Mammoth had been more right but there was already an american band which was called Mammoth so we thought: What the hell we call ourselves for MAMMOTH VOLUME. It´s meanlingless and a little nerdy. And I think many people thinks it´s pretty boring.

Why do you play this music that you do?

-I think that most of the people in the group have been tired to play distortedvocalhardcore, Death metal, Punk and 80´s heavy metal. Some classic heavy metal is never wrong.

-Maybe inspire other bands to play metal in our little town..

Have you got any reviews on the record?

-Yeah, awhole lot. Some mixed feelings. I think the most people loves and HATES us.

-I have read somewhere that we must be a mix of Pink Floyd, Kyuss and Captain Beyond.

Daniel do the most of the music , how does it feels can you feel that you have been with and done some music?

-We do almost all music together. Daniel is a little name fixated(hehehe)

How is a good concert with Mammoth Volume?

Where have you done your best concert this far?

-It was in Germany, in a little club which was full with people. People hold their ears and it was headbanging all the concert. I think we did three extrasongs.

Is it many interview, is it boring?

-Niaw, it´s a lot. But it´s never boring if it not so many questions(wink,wink)

Which is the questions you never get but you want to have. Please ask it and answer it??

-Do you like Monster Magnets latest record?   No, I don´t.

Do you have any favouritesite?

You have an own homesite, who is doing it and how do you get visitors to it?

-It´s me who does it. I think we have about 50 visitors a week or something. If you work a little and have the right contacts so can you call some more people to the site.

-AC/DC - For those about to rock

Have you bought a really expensive record, if you have ,which and how mcuh did you pay?

-We´re trying to come away on an europeantour sometime in the future. we have also some fullengths to do.

-No,thank you. Hope this is enough. So many quetsions....puuuh