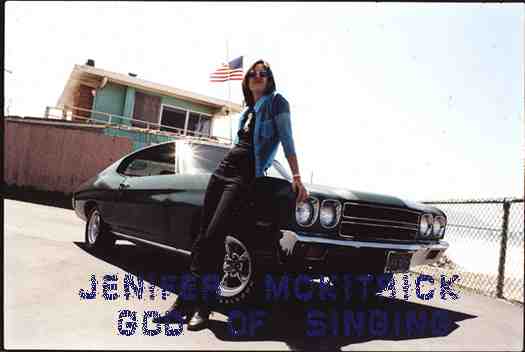 JENIFER MCKITRICK is a girl which really made me warm when I heard her. I send the interview to her right away and here is her answers. 1st of march 2001.

Please tell me a little about yourself, family, age, bands you have played in before?-My first band was The Bettys, when I was in school, and I was in a bunch of other bands. I was in Swingin' Doors for 5 years here in San Francisco, and before that, when I was living on the east coast, there were The Outskirts, Spank the Eggman, Roadhouse, many others.  I live with my spouse and daughter.

You work on Gearhead or what? You do zines and records?(Is there any chance to any more promos and an issue of the zine maybe)-I do work for Gearhead, sure I can try and get some promos sent to you. What do you have/want?

I said in my review that you singed like a god, how did you take it?-I was impossible for the whole weekend. But seriously, I found myself at rehearsal trying to sound more "godlike" and had to laugh at myself, I've never aspired to that before!!

Which are the groups, girls you have been compared to in the reviews?-Stones, Blondie, Patti Smith, Pretenders, Jonathan Richman, The Crystals, The Bodeans, Magazine, all kinds. I feel a bit uncomfortable around band comparisons. Each song is a different world. I don't know how to put bands in different boxes like that. I guess I'm just too close to it to be objective.

Have you doen anything more than Glow?If you have how can I get it?-There is 'Unhinged', the Swingin' Doors record. That's for sale at http://www.jenomatic.com
And there's some rare out of print stuff floating around out there.

Is it easier or is it more difficult to be a soloartist? Which are the best and the baddest parts with it?-It's too much work to be a solo artist, I am starting a band.

When you write music ,what is most important , music, lyrcis or to have a refrain that people remember?-I guess I would have to say that music comes first.

I´ll take mine is written with acknowledgment to David Lynch, what do you mean with that?-The words in the chorus are recycled from Eraserhead, the David Lynch movie. I only saw it once so I can't be sure how close they are to the actual text of the film, but I was trying to copy it as best I could. So I wanted to thank David.

What´s the best and what´s the worst of being a girl in the music business?-The best part is that guys at the shows will offer to carry my amp for me, they don't do that for the guys. The worst part is PMS.

How is it to live in USA today? Is it violent?-If you saw my neighborhood you would laugh at that question. The closest to violence is on Saturday morning because there are too many dot-com employees in line for a cappucino getting a little grumpy because they have to wait for their caffeine. I would say it's not violent enough here, we could use a little action.

Is there any good bands there right now?-Tons. There is not possibly time for anyone to listen to all the great music in the world.

What do you know about Sweden?-Gearfest!

Have you heard any swedish bands worth to mention?-Soul Patrol. Bob Hund. Abba of course.

First and last and most expensive record you bought?-First- Must've been an Elton John album in about 6th grade.

Idols when you were small?-Batman and Nancy Sinatra.

What do you think about the new way to communicate with email and internet and all that stuff?-I don¹t know how I survived before email and the internet.

Do you have any favouritesite yourself worth to recommend?- www.wildbrain.com   They make animated shorts and have an impressive catalog of original content.

How would you describe your own music if someone asked you what the hell is you doing?-I just call it rock. But then I'm not getting a lot of calls asking me to review music, either.

Which is the most peculiar thing that have happened on a concert with you, on stage or in the audience?-Once it was a bummer when I was playing with the Bettys at JB's in Kent OH and I was singing a song and watching them taking a friend of mine out on a stretcherŠ.turns out she wasn't hurt too badly, just a little glass.

Are you often out and play, how does your audience look like?-Mostly young adults in their thirties. Total foxes. I just love em all.

Is it many interviews, is it boring?-I like interviews, sometimes I get an interesting question that makes me think in a new way, get a different perspective.

Which is the most frequent asked question?-Tell me a little bit about yourself.

Which is the question you want to have but you never get, please ask it and answer it? -How would you like your million dollars, in cash or check?  I would say check is fine.

Do you have any favouritezine on the net or on paper?-Other than Gearhead and Skrutt, of course, I mostly just read hot rod magazines and the New Yorker. There are actually a lot of cool new online zines I have been checking out. There is some good writing out there, insightful reviews. Music zines like Bart Ebisch's AltCountry NL at http://www.xs4all.nl/~bebisch
Jelly is great too, at www.jellyroll.com  There's good music reviews at www.milesofmusic.com

What does a zine good?-Good writing.  Second would be subject matter I suppose. Design and photography next.

Is there any bigger labels who have phoned you, wrote to you or something like that?-Sure, all the time, but I am waiting for the right small label to call.  An outsider like me gets lost in the shuffle when a label has too many "important" artists. I'd rather work within a tighter budget and get good service than get a fat check and be forgotten when the next "big" record comes out.

How did you came in contact with Chuck Prophet?-Our mutual friend Vudi (American Music Club, Clovis de la Foret) introduced us at a Swingin' Doors show about 10 years ago. Later, when I went solo, I invited Chuck to play on some demos. He's been on every demo since then, and now Glow, and he's part of the live show when schedules permit.  Maybe we'll come to Sweden.

What is the most peculiar review you have got on your records? -In the French magazine Le Cri du Coyote, Bernard Boyat wrote about the Swingin' Doors "un ensemble leger et fruite, avec quelques aromes acidules." And these other wine analogies. It was just so french.

Do you care about reviews?-Of course! People read that stuff. Sometimes that's the only thing they know about you, just a review here and there.

What are your future plans with your life? -My hope for the future is to evolve.

Which are your future plans with the music?-I want to play a lot of shows this year, go out on a couple tours maybe. Maybe do some collaberative songwriting for the next record.

Wisdomword?-If you think about all the people who have come before us, and all those who have yet to be born, it's amazing that we are the few that happen to be here right now. Think of the odds of that.

Something more to add?
-Thanks for checking in with me.  And keep on truckin.