Heideroosjes is a dutch group which is really good, they were one of the first foregin groups on Epitaph and here is Marco answering some questions from me

History? -Please check our homepage for this. real short; formed in 1989, 7 albums so far, 800 concerts throughout Europe, still the same 4 guys, the new album 'fast forward' is the 3d album for Epitaph. We toured with Pennywise, Bad Religion, Less Than Jake, Offspring and many more...

Please tell me a little about every member in the group, age, family, interests and something bad about every one? -We are all very ugly, we like to jerk off (only on tour, at home we have our girlfriends for this kind a work). Serious; we all like punkrock but we also listen to other stuff like heavy metal, ska, reggae and even disco.

When you got the contract with Epitaph you were on of the first nonamerican group which is got a contract with them ,howcome? -Heideroosjes have proofed to be able to reach a lot of punkrock-kids. Epitaph noticed we did well in Holland and Belgium. (we did sold out tours there and we sold over 120.000 copies of our albums). We wanted to present ourselfs to alternative musiclovers in the rest of Europe and Epitaph could help us with that.

On your latest CD Fast Forward you sing both in english and in dutch, howcome, isn´t it better to have only one language on the same record? What does Epitaph thinks about it? -We agreed with Epitaph that we have fully artistic freedom. We sing in every language we like. We also made songs in German and even in our own old-dutch dialect. For commercial reasons it could be better to sing only in English but we don't care about that shit. We sing what we want to sing, in the language we think the song sounds best. We want to be free in making our music. 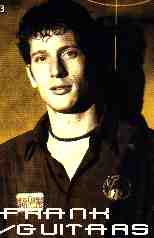 Which is the best language to sing in? -Dutch is easy because it's our first language but because my English is pretty well, it's also easy to sing in English. But also German is real funny to sing.

The name Heideroosjes what does it mean, and where did it come up from? -It's a Dutch word for some kind of sweet rose. We picked that name when we formed back in 1989. At that time punk-bands had 'heavy' names like Dead Kennedys, Dayglo Abortions, The Exploited. We wanted to make a difference by choosing a silly, stupid and sweet name.

Is it many interviews right now, is it boring? -Depends on the questions. Explaning what our name means is pretty boring yeah (hahaha)

Which is the question you never get but you want to have, please ask it and answer it? -Are you homo-sexual? answer; no, I'm not. 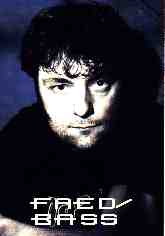 How is musiclife in Holland right now? -It's pretty ok. we have a small punk-scene here but we have a big alternative scene. We have a lot of clubs where alternative music is brought live. That's a good thing.

Is there any good bands there? -Yes, to mention Undeclinable, I Against I, NRA, Human Alert, Krezip, Green Lizard, Dreadlock Pussy and many more

What do you know about Sweden?; What is typical swedish? -I know you guys talk real funny. I heared you're country is really beautiful but also real expensive. We've never played in Sweden but we hope to play there on our upcoming European tour in November.

Have you heard any good swedish bands?- I'm not sure if these bands are from Sweden but I know Hellacopters, Backyard Babies (both great), 59 Times The Pain, Satanic Surfers (cool), Millencollin, Peepshows, and eh....that's about it.

You did a CD-rom thing the last CD, why and what did people think about it? -Actually it was the cd before the last. It was on 'Smile...you're dying' . We put our videoclip on it. We did that because we wanted to give the people something extra for free. Now they can watch the video on there own computer. We thought that was a cool gift.

What does punk mean to you? -It means doing what I like. It also means to me; expressing myself in my own way. It means freedom to do what I want (without hurting other people by the choices I make to live my life). Besides all this it's a style of music I apreciate.

How is a good gig with Heideroosjes? -If the crowd and the band reach a orgasm-of-energy together. We always try to communicate with the people who come to our shows. It's important to have a good time together. Respect, noise and fun are the basic ingredients

Do you have good contact with your fans, if you have in which way? -Yes we have. We do a lot of stuff at our website www.heideroosjes.com and we produce our own newsletter (free). We send it to thousands of kids who apreciate our music. It's a direct way of communication and we like that. Fans are important to us. Without them, we are nothing.

You have an own website or, is it important to have it? What´s the best and what´s the worst of having it?- It's a fast way of communication. Nothing worse about that.

What´s the best and what´s the worst with internet?- It's a big library for everybody. you can find info real fast. That's good. Bad thing is the new kind of criminal activities, because of internet (childporn, hacking, etc).

What is the most peculiar which have happened on a concert with you, on stage or in the audience? -We experience a lot of strange shit on the road. I can write a book about that. Once did a tour in former Yugoslavia. Some guy came to the show with a real big riot gun on his back. The security took the gun but it scared me as you can imagine.

It sounds a little like you have listened to older punk than Bad religion, Green Day and these bands, do you have any old favorourites?- My old hero-bands go from Minor Threat, Youth Of Today, Ramones, old Bad Religion, Gorilla Biscuits, Motorhead, Dag Nasty and many more.

Please rank your five favourite records, five best concerts you have been to and the five most impoartant things in life? -There no best records, concerts, or such things. There only things I like or don't like. Things I like......all albums of the bands mentioned above. Cool concerts; Gorilla Biscuits ('92), Seven Seconds ('92), Agnostic Front ('91), Murphys Law ('91), Dropkick Murphys ('00), Rage Against The Machine ('97) and many many more

Idols when you were small? -Popeye, Iggy Pop and my Dad.

It seems like you´re interested in motorcycles and cars overall, howcome, is this interest big? -No not really. My family is really into motorcross but that's about it. We just like motors and fast music. I can't explain why.

Do you think music can change lifes?: If you think, please give me an example? -Yes, I does change lives. I get a lot of letters from people who had put a lot of energy out of our music. Or people who finally had the guts to speak up about their sexual abuse or molesting by parents. Just because we wrote a song about it. That means a lot more to me than how many records we have sold.

Do politic and music goes hand in hand, do you think? -Sometimes. I just spit out my point of view. I'm not a politician who wants to convince people. I have my statement and every person is free to agree or disagree with me. We also have fans who only like the music and don't care about the lyrics. That's fine with me.

Is there any bands that you think do good political music? -Rage Against The Machine, Boy Sets Fire (sometimes), Youth Of Today (back in the days), Minor Threat,

Do you do any covers, which and why just them? -In 11 years we've played a lot of covers. Some because we like them (Ramones, Sex Pistols) and some because we want to fuck up those songs (Spice Girls)

Something more to add? -Anyone wants to buy the planet?  cheers Marco