Good Riddance is a damn good band in the same vein as many other american punkbands but I think they have something different many times in their music. Luke in Good Ridance amnswered this questions in the beginning of july 2001.

A short history lesson about Good Riddance?
-This is about as short as I can make it: Good Riddance was started in 1986 by lead singer Russ Rankin.
Guitarist, Luke Pabich, joined the band in 1990 as the 2nd guitar player.  Between the years of
1990 and 1994 we went through numerous band member changes in the process of finding our identity.  Shortly after bassist Chuck Platt joined the band in 1994, we were signed to Fat WreckChords and released our 1st full length album "For God and Country."  Original drummer Rich McDermott quit the band
shortly after we began touring on this album, soon after to be replaced by Sean Sellars.  Sean was our drummer from 1996 through 2000 and performed on the majority of our albums and countless tours, only to depart to pursue a career as a studio/stand in musician.  At this point we took a hard look at the band to see if we felt we should continue to exist.  After deciding we felt we still had good music to offer people, we hired Dave Raun(Lagwagon), to fill in as our drummer while we sought out a permanent replacement.  We had one drummer in mind the day after Sean quit the band.  His name is Dave Wagenschutz(formerly
of Kid Dynamite/Endpoint/etc.).  He declined our initial offer because he felt
unsure if he wanted to continue to play music in a band.  We stayed in contact with him for the months following, while continuing to search for a capable replacement. About six months after we originally asked him to join, he decided he wanted to do it.  As of October 2000, he has been the drummer for Good Riddance.


Please tell me a little about every member in the group, age, family, and
something bad about every one?
-Luke: Age 30//over analytical/nice guy most of the time, but is sometimes a dick.  Born a poor black child.

Russ: Age 33-Wow! he's getting up there/Serious most of the time but has a good
sense of humor on occasion/Like's hockey, reading, chips, tattoo's, coffee.

Have you had many members in the group through the years,  do you have any
contact with the old ones?
-Too many to keep track of!  We have remained good friends with the
original drummer Rich McDermott.  He is recently divorced and playing in a band
called "Audio Crush".  I talk with our old drummer Sean Sellers from time to
time.  He lives in LA and is married, seeking employment in a rock band. 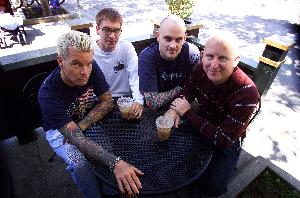 
Do you care about reviews? Have you ever changed anything after a bad
one?
-When I was younger I cared about reviews, but not anymore.  A review is
simply an opinion.  If you cater to other people's opinion's of your music then
you are sacrificing your integrity.


Which is the most peculiar review you have got?
-I can't remember one specific review that stands out.  The one's that
make me laugh are the one's that compare us to bands that none of us like or
would even entertain the thought  of being influenced by.

Which bands are you being compared to in the reviews?
-We used to be compared a lot with Bad Religion and NOFX.  That
comparision doesn't bother me too much because I'm sure we've been influenced by
them to a small extent.


You´re on Fat Wreck, is it a good label, what´s the best and what´s
the worst with it?
-In my opinion, there is no better label for punk rock than Fat.  They
allow the bands complete creative control and back them up with great distribution
and advertising.  Everyone who works at the label is intelligent and
dedicated.  The only downside of being on Fat is that we tend to get catagorized as
sounding and being a certain way.


What do you like the other bands there?
-Snapcase, Avail, Death By Stereo, Sick of it All, etc.


What does punk mean to you?
-Being punk to me is all about being yourself.  This means that more than
likely you may have a hard time fitting into the rest of society or even the
small social circles in which you live your life.  It is about being proactive
in your life and thinking for yourself rather than having people tell you how
and what to think.


Can music change anyones life do you think, please give me an
example?
-Absolutely.  People connect with music that reflects who they are or
inspires different thoughts and perspectives on life.  Many people I know have
been inspired in there life by music more than anything else.


Do politic and music goes hand in hand do you think?
-Only if the person writing the music is truly politically minded.
Writing political lyrics without having a solid understanding of the issues you
are writing about can be dangerous.


Which of your old songs, albums do you like the most?
-My favorite GR album is Operation Pheonix because of it's unforgiving
intensity.  Heresy, Hypocrisy and Revenge is my favorite song.


Which of your song is the most frequent asked song?
-Mother Superior, Flies First Class,  United Cigar


Do you do any covers, which and why if you do?
-On our new album we do a Psychedelic Furs song called "In My Head."
Russ is a huge Furs fan and convinced the rest of us to cover one of their songs.


Which are the symptoms of a leveling spirit?
-"Symtoms of a leveling spirit" is a phrase that was coined by James
Madison, a former US president and original framer of the US constition.  He feared
the idea of the non elite citizens of the US gaining power and wealth.  The
phrase is symbolic of the people who hold the power and wealth doing everything
they can to keep it.


Have you heard any swedish bands worth to mention?
-Intensity, Satanic Surfers, International Noise Conspiracy, Millencolin


How is a good gig with Good Riddance?
-Lots of people with positive energy coming together to rock.


Do you have good contact with your fans, in which way?
-I meet many people when we are out on tour.  Usually I enjoy sharing
conversation with people from around the world.  It has really opened my
mind to different ways of living.  We also recieve quite a bit of mail from fans
that. Russ usually responds to.


You have an own webiste, is it important to have it, do you think?
-I think it is very important to have a website in order to make an
attempt to represent the band correctly.  We have had other people do GR websites
that have fallen short of what we would like to present.  Our new website
www.Good-Riddance.com  will be up and running July 10th 2001.


What do you think about the new way to communicate with email and
internet and that stuff?
-I think it's the greatest thing that has happened in the modern world
because it gives most people the opportunity to educate themselves and communicate
with others easily and relatively inexpensively.


Any favouritesite yourself?
-No particular favorite.  I tend to browse through different sites that
contain information I may be seeking out at any given time.


Which are the latest, the fisrt and the most expensive recod you have
bought?
-The first record I ever bought was "Kiss Alive 2" when I was 7 years old
The latest records I bought  The Cars "Greatest Hits" Kreator "Extreme Aggression"


Is it boring with interviews?
-It depends on the questions.


Which is the question you never get but you want to ahve, please ask
it and answer it?
-I don't know.  That's a good question.


Which are your own futureplans as a human being?
-My passion lies in music, so I see myself staying involved with writing,
performing and producing.  I always like to educate myself about new
things, so I may be interested in going back to school at some point.  Marriage,
Kids????


Which are the bands futureplans?
-Lots of touring over the next year(US, Europe, Japan, etc.).  If it goes
well and we are still enjoying it, I would imagine we'll end up recording
another album at some point.


Something more to add?
-Damn this is a long interview.