Get up Kids is a group that I haven´t heard of before I was asked to do this interview , I really liked their CD Something to write home about and it´s about this we´re talking when James(Keyboard player) in Get Up Kids phoned me up in the end of april 2000.

The whole interview is a little bit difficult to hear beacuse when he talked I heard myslef and it was a little bit difficult always to hear what he said. But he says that he´s in his bedroom in Kansas City with his girlfriend taking his trousers down.(hell know) Get Up Kids have been together in around 5 years and James have only been in the band for two years. James is still playing in another band, it´s a hardcoreband called Color Less and another band.

James it´s not really sure how they came in contact with Epitaph and I don´t think that Get Up Kids is a typical Epitaphband and that´s what james have heard too. -What is a typical Epitaphband. In USA Epitaph is really really rock,says James and not many Epitaph  bands have a keyboard. We haven´t yet found out the good things with Epitaph. But a really good thing is that they´re a pretty good label in Europe and they have a good distribution.

They have been on the roads for a long time an they did a tour in Australia and one in Japan. Japan is a very good place to play James think. The australiantour was a long tour and James tell me that in Melbourne is a very big undergroundscene. They´re really into american and european stuff. But in the rest of Australia it´s more about Australian stuff. -But in japan it´s fun, beacuse everything which is about western culture is good. They speak english so perfect in Japan. And many of the kids there can speak four or five languages.

The difference between the audience in Japan comapred to USA is that they climb on the speakers, they scream when they come in. In Australia they didn´t know what to do even if many of the kids were really cool says James. Many kids came after the show and talked to the band and said that they´re really into the band. -We were opening for a skaband, it was a doubleplatiumsellingband in Australia, we´re poppybut we arent poppy enough and we´re not definetaly ska so all the skakids screamed GET OFF THE STAGE!! But it´s still to fun and we get back and the tour get better. We´ve met a lot of friends. 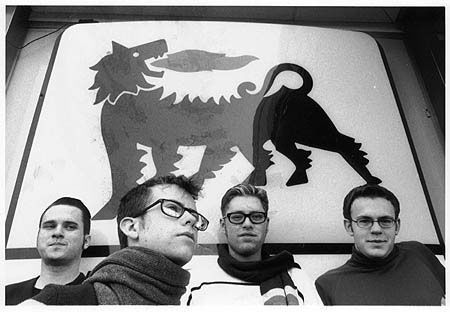 When they come to Europe it will be James second trip here and the rest of the bands third. The first time they were here they were only here for 12 days and they played in Germany, Holland. This time are they going to play all over Europe and they´re going to be here in a month. After that James is going to be travelling around for a couple of weeks. Their last show is in Germany and after that they split up and take the train. And they´re going to back in USA in july. They´re coming to Europe with a band on their label,The Universary and they´re going with Get up Kids all the tour. That groups is a little more keyboardoriented than Get Up Kids says James.

When I ask James what he knows about Sweden he tells me that he knows about Doughnuts, Refused and The Cardigans. And he finnaly ask me if Kent is from Sweden. He saw Kent play in Kansas and it was a little bit like Get Up Kids being in Australia. It was about twenty people at their show. He thinks they´re good and he thinks that´s a shame that not any more people were there so see them. He knows that Sweden is Northern Europe adn he thinks it pretty cold here. He have heard that is many blond people over here.  But when I tell him that it is 27 degrees this particular day he laughs at me. -It is winter now or??? But he thinks I was talking about Fahrenheit but I meaned Celsius.

It´s a big mix when we talk about who does the music in Get Up Kids. Everybody in the group come with ideas and then they mix it up. Matt is writing about 95% of the lyrics. They start on an idea and they everybody is working with it and then they get a song out of it. Matt lives in Boston now and Brian lives in Los Angeles so Robbie, Jim and James are the ones left in Kansas City. -But were on tour so much so it´s really nice being home and do nothing,says James.

Kansas City is pretty boring James thinks. The only thing you can do is to eat barbeque and listening to jazz in the clubs. The political climat is a little weird an it´s an election coming up in the fall and you have to be involved in it but James isn´t like anyone of the pople who´s running, He don´t share their opinions but he´s gonna vote because he "must" -It´s so many news channels ,we have about 8-9 channels which is only showing news about politic. and the poeple only argue with each other. They spend a lot of much money to make people look bad. And you don´t want them leading your country.

The rock/independent scene in USA is very huge right now and it has grown for the last 2 years. And there is amny bands who do everything by thier own and that´s the way to do it means James. It many bands that James like and when they´re going on a tour it takes long time for them to figure out which band they want to have with them on the tour because there is so many good bands in USA. So he don´t want to mention any band so he don´t piss any band out. 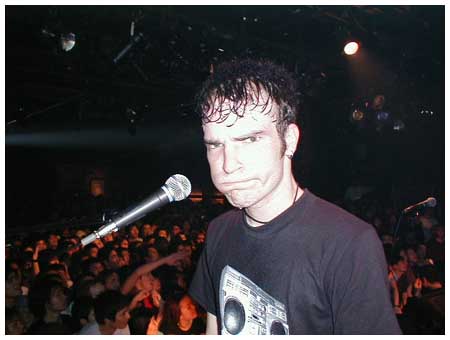 James have bought many records the last and he get many records in his mail. He likes many hardcorebands and he ask me if I remember a band called Drive Like Jehu. There´s a new band with members from that band called Hotsnakes which are very good. But he mostly buys vinyl when he buys records. He have recently bought a lot of hiphop and electronic music. A good concert with Get up Kids, how is it?  -It´s fun, everybody going off,everybody smiling, having a good time and that everything is working ou right. The songs sounds good and our performing is good. You can be on your worst mode when you go on stage but the crowd can get you in a better mode.

It´s hard to say how the average fan look like James thinks because it´s som many different people who goes to their concerts. Kids with tattooes all over the bodiesand kids which look like they have going from the church to the concert. The age varies from 13-25 and their audience is pretty young. James is the oldest member in the group and he has just turned 24. The name Get Up Kids come from a song from Matts old band and it´s a lyric from a song where they singed "all the suburband get up kids" and they took away suburban. The robots on their new CD and their new T-shirts did a friend to James do. His name is Travis and he did them in day. -It´s a full huge painting as he did for us and have you fold out the  record you can see the whole painting but its four feet long and it´s huge. it´s really really cool.

Something to write about is their third relase and their second fullength album. And they have done some singles too. The old records isn´t on any label in Europe but in USA they´re on Doghouse. They have done many interviews and it´s about three every day right now when the new record have came out. James don´t think it´s boring beacuse he haven´t any job so it feels like he is at work. people compare them to many different bands and sometimes they been used to being compared with. Like some newer bands. -It´s flattering to being compared to,says James.

They have an own website www.thegetupkids.net and they have been helped out to do it. James thinks the new way to commuincate is either a good or bad thing. He thinks that everybody in the world can get on the net and talk crapand also good stuff. People can do it it to what they want. Some fans contact on e-mail and some interview have been done in that way. They come to Sweden and play in Stockholm ,please meet them there and have a good time.