Doug from GC 5 gave me these answers in the last days of december 2001. I really like their raw punk rock n roll and I really want to hear some more from them soon.

History?
-The band started as just Dave and Pete playing in our basement. This
was 1995 or so. I started playing with them in early 1996, and our
friend Chris joined on guitar later that year. We spun our wheels just
writing silly songs and entertaining ourselves and our friends mostly.
We didn't have a lot of aspirations to do anything big with it. We put
a couple of 7"s out between 1998 and early 2000, and everyone moved to
Cleveland in 1999, once Dave and Pete were out of high school. We
started playing more shows, and getting our name out in Cleveland. We
met the Hudson Falcons in summer of 1999, and hit it off with them
really well. Mark encouraged us to get our full length out, and start
touring, and we ended up doing that. Now, we tour 7 or 8 months out of
the year, and work really hard on the band. One thing just sort of led
to another.

Please tell me a little about every member ,age, family, work, interests
and something bad about every one?
-Pete is a couple weeks shy of 21. His parents are both Greek immigrants,
so he's fought against their work ethic his entire life. He makes pizza
when he's home from tour. He's into porn and video games, and he's the
outgoing, extroverted member of the band, I suppose. He snores too much,
which gets annoying on tour.
-Paul is 20. His dad is a college English professor, and he is one of
most genuinely weird people I know. He delivers pizza when he's home
from tour. He's into reading philosophy and political stuff. He's the
unpredictable member of the band. He has trouble digesting most foods
without getting gas, which gets annoying on tour.
-Dave is 20 also. He's one of the funniest people I know. He also makes
pizza when he's home from tour. He's into, well, being Dave. He has no
bad habits that I'm aware of. He's the dependable, reliable member of
the band.
-I'm 22. I am a substitute schoolteacher when I'm home from tour. I'm
into reading and worrying. I'm the foil to Pete personality wise, so
of course I do most of the writing. I have more bad habits than I am
aware of, so I'd be the wrong person to give you the dirt on myself.

How is life in Ohio?
-We like the Midwest a lot, especially after travelling. There's a bit
of envy of the coasts as far as the music scene, but the people are
much nicer, and the cold weather and lack of entertaining things to do
gives you character


Is there any good bands there?
-Some really good bands, actually. Stepsister is a great 70's rock/punk
kind of band. Along the lines of the Hellacopters and that sort of
thing. The Chargers are really good in a garagey/Detroit way. Dakota
Floyd is a great female fronted indie rock band, and Rosavelt is a
great pop/rock band. They're all like-minded people who run their
bands the right way, and aren't into ass-kissing, which is nice.


Have you done anything more than Horseshoes and Hand...., if you have how
can I get it?
-We have a full length out on Outsider Records, and we just released
our Singles Collection, which is all our old 7"s and comp tracks on
our own Cosa Nostra Records. You can get them through our website, or
through Leprock Records.


How would you describe your music with three words?
-Reflective, energetic, honest


What does punk mean to you? Is it only a word or is it a lifestyle?
-It's such a loaded word, that means so many things to people, that I
hesitate to use it to describe anything. At best, it's a word that
describes someone as willing to challenge the world around them, and
ask questions. I would hope that in that context, we'll always be
punks.


What do you know about Sweden?
-Very little, except that you have very active government programs and
a strong social safety net. It seems pretty laid back to me. It sounds
like a nice place.


Have you heard any swedish bands?
-Mostly the Hellacopters, and other Hellacopters influenced bands that
have come out of there. It's strange to hear about those types of bands
being treated as stars over there. Very different from the States.
Dave and Paul are huge Haunted fans. Paul's very much into the
International Noise Conspiracy also. And is it me are is Roxette a lot better than Abba?


Leprock, is it a good label?
-Very good. They liked us enough to help us establish a name for
ourselves in Europe, which would have been tough otherwise. They've
been very good to us and active in promoting us. We actually met
Florian Walz in Long Island on tour, and he was a really nice guy, so
our suspicions about that were confirmed. 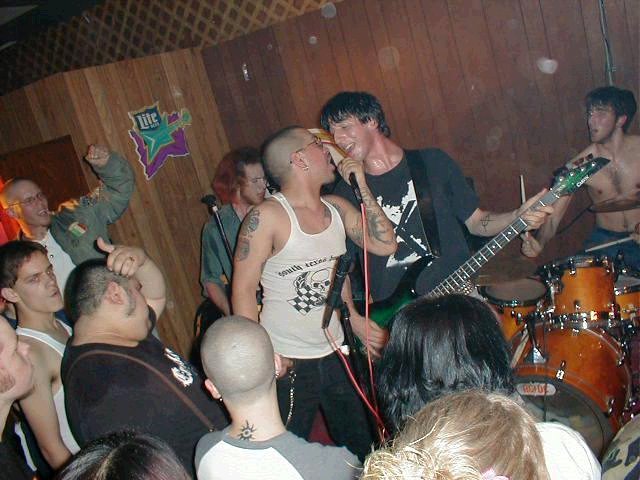 GC 5 , does the name mean anything or how is it?
-It's a tribute to a friend of ours that passed away. No huge meaning to
it. It just seemed like a good band name when we were 16. Not so much
now, but you can't erase the past.


Is it important to have a good name? A really good band name, what is it?
-I hope not. I'm saving all the good band names I have for my future
projects once I get sick of dealing with these three. ha ha.

You did a Cover of Paul Westerberg on your mini-cd, why Paul Westerberg
and do you do any other covers?
-We all like the Replacements, especially me. It seemed like a good
cover to do. It dealt with being young and confused, and not tied to
what your family and society have laid out for you, which seemed
fitting for us. He's an amazing songwriter, and he's very good at
touching on those sorts of things. Also, we wanted to record that
double guitar lead. We do lots of other covers. Suspect Device by SLF,
In the City by The Jam, Fountains by the Nils, When the Shit Hits the
Fan by the Circle Jerks, and a bunch of others. We've been playing
covers since we started, so we know a bunch of them.


How is a good gig with GC 5?
-Great. We love playing live, and we tour a lot. First of all, it
involves seeing the people that always come out and support you in
any given town. Then, once we're playing, on a good night, there's no
thinking about anything. We don't play the music, it plays us. The
energy between the crowd and us, and the music really makes for a good
time. There's nothing like playing a really good show.


What is the most peculiar thing which have happened during a gig
with you, in the audience or on stage?
-We got a gun pulled on us at a house show in Pueblo, Colorado. There
was a fight, and Pete went to break it up, and he was punched by a girl.
He told her boyfriend that he'd fight him if she punched him again, so
his friend pulled a gun. The rest of us were laughing at the general
stupidity until the gun came out. That was interesting. Paul is also
easily persuaded to play naked, which never fails to clear 3/4 of the
room and keep the real weirdos around. 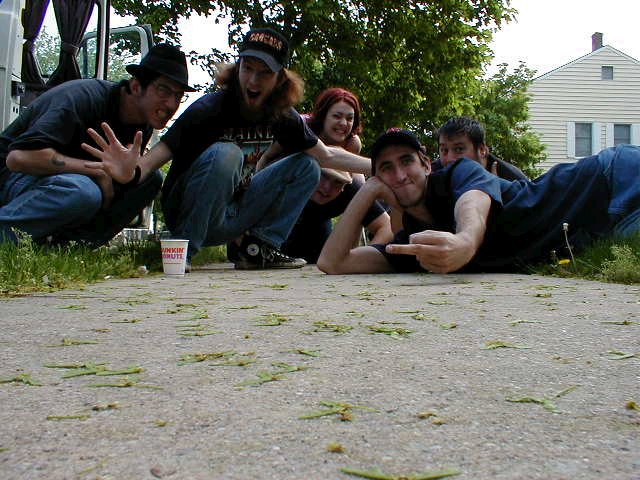 How does the average fan look like to GC5?
-It's really varied, and it depends on where we go. We have a lot of
artsy fans. Lots of graphic designers and people like that, actually.
We do well with kids and punks, although we don't have much of an
image to push on them, and ok with skinheads, even though we don't
really sing about the usual work/drink/fight topics that a lot of them expect.
I like it that way, because no one can enjoy us based only on us
fitting a stereotype of what they expect from a band. They have to
digest where we're actually coming from.


First, last and the most expensive record you ever bought?
-First record was Living Color - Vivid when I was about 10 years old.
Last record was Joe Jackson - I'm the Man
I don't think I've ever paid more than $30 for any music, but I've
bought Bad Religion and Rancid bootlegs in that price range.


What do you think about the new way to communicate with email and
internet and all that?
-It's great. I wouldn't be talking to you otherwise. It has its
potential for pitfalls, but as far as keeping in touch with people,
it's amazing.


Any favouritesite yourself?
-I try to avoid unneccessary internet use, because I'm capable of
wasting a lot of time once I start poking around. www.theonion.com
is amazingly funny, though.


What is your strength as a liveband?
-We go all out every time we play. We don't hold anything back, whether
there's 5 people there, or 200 people there. Anyone that wants to see
a show deserves to see a great show, so we try to give it to them.
Especially on tour, getting to play every night is the only break from
the monotony of the rest of the trip, so we get all our energy out then.


Which futureplans do you have for the band?
-Keep touring, writing, and recording. Hopefully we'll get over to
Europe before too long. The new record label will hopefully keep us
busy too.


Which futureplans do you have for yourself as a human being?
-That's tough to say. The band is keeping me very busy right now, and
that crowds out lots of other things, like relationships and
involvement in the political things I'd like to do. I think eventually
it will settle down a bit, and there might be more time for that. In
the long run, there will have to be, I suppose. In the meantime, I'm
enjoying what I'm doing, so I don't regret it.

What do you think about the situation in USA, in Afganhanistan
and so on?
-It's really scary, actually. First of all, I'll state the obvious, that
what happened on Sept. 11th was terrible and tragic, and the people
responsible for it did a terrible thing. For one, the first thing to
go out the window is concern for human life (on either side). Also,
it's troubling here in the States to see how people are viewing this
as good vs. evil rather than treating the situation like it has any
context or history. Nothing good will come out of this as long as no
one is looking at this realistically and assessing their role in what
happens in the world. The US response is awful too, and is responsible
for taking lots of innocent lives. My only hope is that people
everywhere will take a principled stand against killing innocent
people, no matter how righteous the cause may seem. In the meantime,
the world is going to look more and more terrible.

Wisdomword?
-I'm not that wise, so I'll leave wise words to be said elsewhere.


Something more to add
-Thanks for doing this interview. We really appreciate it. You can find
the latest info on us at www.thegc5.com or contact us at
thegc5@angelfire.com
---
The GC5
(216) 544-4742