Fattijons is the group which never dies it seems like. They started in my hometown Uddevalla many years ago and a very short time I tried to be a singer in the group but I don´t manage to good. It´s the basist who have answered the questions in july 2001.r

History? - We started 1978 in Pedda basement(only originalmembers left today is me and Rolle) Ater some rehearsals we did a gig on teh school we went at and it don´t get along so well(because the punk was new and we were the only punks in the school and we were on stage) So the success wasn´t so big. 1980 did Blomman his first apperance beind the mique and everything went on. Today Fattijons have  Putte on bass , Blomman on vocals and guitar, Rolle on drums and Bubben on vocals. Please read more on our website. http://www.minhemsida.nu/fattijons

The worst things in the groups history? -Wow…How smart are you if you hit the bass in the floor on a gig when you´re fifteen and don´t have any more money. Or when Blomman went through the scenefloor and when one in the band was going to have some fun with a girl and the other in the band come into the room and was putting glue in the ass on the poor Fattijonsmember  who tried to have some fun. It´s lot of things which have happened. 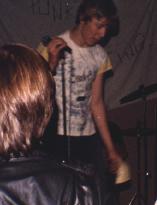 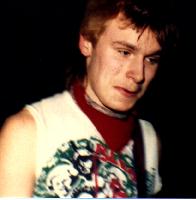 What got you to get together after all these years, and how was the felings on stage? -We get asked if we couldn´t do a reuniongig, I said no...Rolle said maybe ..and Blomman said yes and he´s the biggest guy in the group so...and that I´m so fucking for...because these guys means a lot for me and I noticed that it´s once a punk always a punk (the text around a picture of Sid have I tatooed on my arm as a 36 years present to myself) We´re a band , we´re soon 40 and we have still opinions and attitude, we´re the picture of our generation which have grown up, raised kids and we have got som spare time and our flame is still burning.

You do own songs nowadays, is it only Blomman who does them?  -Own songs nowadays?In the begiining of the 80´s we did only own songs if you count out "Ronka" which have been on our repertoire all the time but on the reuniongig we only did covers because we haven´t any time and we was going through the thing about if we´re was a band , if we could stand out with each other. And we come to the point to give Fattijons the chance again and Blomman is a genious(Lennon of punk) he writes good songs all the time and it´s a fucking tempo in the songs(it sounds much Asta Kask)..and...what the hell do he have to live in the deepest of Småland. My role in the group is to take out some chords to the old forgotten Fattijonssongs like Hata Skolan from 78...which is the most frequent asked song because of that a webmaster(who could it be) put it out on a compilation in the beginning of the 80´s(the song have been on a Bon HUnd-concert too) Syra is an old song which we have taken foreward and that we played on the latest gig.

How can you stand out with Blommans GAIS-things? Which footballteam do you hold as your favouriteteam?-Stands out...we must...but GAIS have a place in my heart too. Man United...both I and Blomman loves football. Rolle hates sport and he don´t allow us to plays footballsongs(but we have done a super GAIS song), he´s afraid of that people´s getting angry. But it will come.

You stand almost still on stage, is it something you´re going to work with or can´t you move because of your age? -No we´re not too old. Blomman have ache in his knees(we was thinking of to have a Bon Jovi thing so we could put him out in the audience sometimes) but it´s BUbvben who are going to be the man who´s running around. He could be on our last gig...Rolle isn´t moving so much because of that he plays the drums...and I have ache in my hands after the first gigs 99.

Whihc is the most peculiar review you ever got? -Nothing peculiar....but everyone complains on the sound on our CD:s(often liveconcerts...and I can understand it to a point) but these things you didn´t do 1977. Because then was all punk..today you´re used to hear digital ultra sound. I´m afraid if you think too much about the livemusic we all love and that people not are satisfied that we play ourselves and don´t let the computer and musicindustry decide. Fattijons is going in to a studio this summer and record a 14 -song CD with only new and some old songs.

Do you care about reviews? -Yes....a kiss in my ass warms me upp. But a hit in the back hurts.

How is a good gig with Fattijons? -We´re going to be better on them...but we´re harder and harder and plays faster and tighter than ever, we have the unlucky to play as the first band and then we´re not having that big audience and it have comed when it´s 3 songs left to play.

How lives the punk in Uddevalla then? -It seems to grow and we have had some younger punks in the rehearsalstudio when we have doing our rehearsals.

Is there any good bands there nowadays? -It´s only we Fattijons and Strawdogs and Psycko Terapy…Unfortunealy it seems easier to buy records and drink beer than to play themselves.

Favoruitebands in Sweden and in other countries? -I like bands from 77 til today when you talk about favouritebands, Blomman listening mostly to swedish punk and Rolle is the same way as me.

How did the name Fattijons come up? -We was 13 years when we began to play and we couldn´t afford a tambourine...and then we saw Pistols record Floggin a dead horse and on the choccolatebar it was written Fattijons(wrong spelled but it was cool to impress on us so we kept the name)

Do many people comment your age? Do you care about age, think of Charlie Harper and Ronnie Biggs? -Ronnie Biggs…thanks…. I got a comment from a guy in the age of 16-17 and he said that he isn´t afraid to be older when he had seen us play. And then I think we´re pretty interesting because we have been around for so long and we have seen and met so many people through the years. we have stand on the stage and shouted together with Ebba Grön, we have played with Asta Kask. We have seen Ramones, Clash and we have been in the punkmovement from the beginning and seen the way it have been with oi, skate and so on. No , the age havent any sense, ask the man who loves young women Rolle.

Ány new songs on it´s way, what are they about? -There´s about 20 new songs but ity´s hard to rehearse, not that we haven´t any place to be but we haven´t the time. We lives in different cities so we record music in to each other telephoneansweringmachines and rehearse that way. And we hope to have 3-4 new songs when we play in Gothenburg in september. Blomman is still young and angry in his mind and a new song called Demonstrationståget(The demonstration) an d it´s about every man´s right to free speech(it´s really in time if you think of what happened in Gothenburg in june2001) Another song is Lennart which is about Lennart which is a pedohile, and we write and sing about every thing which is wrong in our society. We have all come in to the middleswedish life but we can see it with oher eyes and from another perspective and Blomman writes punk with a soon 40 years man eyes and that gives punk a new dimension and it can ge strength to the one who is younger.

How it´s going to combine your work with punkrock? -Ok …

What does punk mean to you? It´s too high but think after for yourself ….how you have been formed as a human being, and how had your life looked like if you haved follow the stream...it´s everything...open minds for people, music, culture and art. Through punk I feel like a whole human being and my children cannot do uproar beacsue daddy is listening to the worst music at home(it´s them who shouts, not so HIGH), you don´t die ater 25 and I´m prud that I haven´t any dancebandsCD in my collection. Punk is an attitude.. I don´t like swedish bands who is calling themselves something fun and sings "funnY" lyrics and its too much "Mohawk-Medusas" around.

Whats´the ebst and what´s the worst which have happened in your time as a punkrocker? ? -All the things we did together in UA punx but when we broke up it was hard but now ere back together in the old gang and the bands plays once upon a time and it had been a very big interest everytime and it have been sold out and it have been a good mix of young and old punx.

To be a punkrocker in Uddevalla in the 70´s and in the beginning of the 80´s , it was some trouble?  -Yeah, fuck, we throwed bottles on the raggare and their cars and they was hiitng Blomman ...and have it been today it have been uproar. After a gig in Trollhättan Fatijons been escorted by the police to the train and of raggre. They said that they didn´t want people like us in their city.

First, last and the most expensive record you have bought? -Beatles, Weezer and I haven´t bought any expensive record , before I stole it...and ther is first Damned.. I have a really big vinylcollection. It´s fun that there is fanzines so you can get good advices on which record to buy because it´s so expensive to buy records today, so you can chance on any record.

Idols when you were msall?   -The whole glamrockthing with T:Rex, Sweet, Bowie and then came the punk with Pistols,999 and the whole thing with swedish and english punk and when the americans wake up I listened to them too.

What do you think about the new way to communicate with email and internet and all that stuffr?  -Good....it must be a dream for a fanzinewriter. But like everything else its´much shit and it does things easier for negative and extreme things in our society to spread their shit. If we thinks Internet have open the world ..what the hell doesn´t nazists, pedophils and other idiots about it.

Wisdomword? -If you´re a wise person be yourself.

Futureplans for the band? -Studio in july and record a cd and record the tributesong "Joey Ramone" in english beacsue its´some interest for our music in other countries. Gigs in august and spetmber in Gothenburg to mention some. 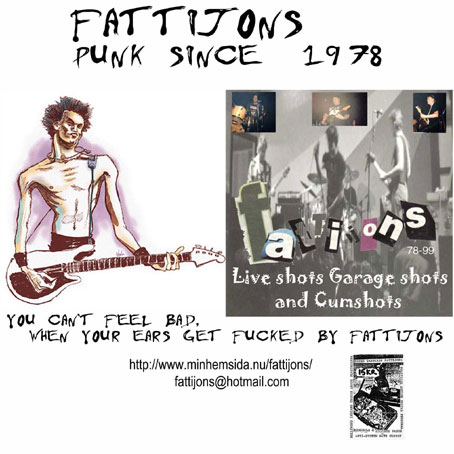 Thank you that you´re around and that your sine are around and that all other people who helps the underground music to live..we have been around for 23 years and to put all this years together isn´t easy but some info is on our site or mail us on fattijons@hotmail.com

Are you curious on Fattijons please buy Fattijons live CD for 40 swedish krona.