I used to think that this heavy metal was boring but nowadays I really appreciate the style so this type of old school metal that Exciter play is really cool sometimes. John Ricci from the group answers my questions to the group in july 2004.

Please tell me a little bit of history of Exciter,have it been many members changes?

-Actually, there have been many personal changes over
the years.


Please tell me a little about every member, age, family, interests and something bad about every one?

- Jacques Belanger, single, works in the high-tech
industry.  Rik Charron, married with 2 children, works
as an auto mechanic.  John Ricci, divorced with 1
child, works as a music store manager.  Rob Cohen,
single, works for the Federal Government of Canada.  I
have nothing bad to say about the members of the band.


I describe you as a power metal band but with the following also "But it´s a little bit punky sometimes and sometimes in the spirit of Discharge" what about that?

-The band's influences are 70's heavy metal bands,
like, Priest, Sabbath, Motorhead, mixed with 70's punk
bands.  You're right, there is some punk influence in
Exciter's music.


Which other bands are you being compared to?

-We are usually compared to Judas Priest.  As far as
the vocal style and song structure is concerned.

-We do not let any negative reviews bother us.  We
don't really care.


Which do you trust the most, the bad or the good ones?

-We trust most, the good reviews.  The bad reviews
are given by journalists that really do not understand
what the band is all about, and are not into our style
of old school metal.


Which is the most peculiar review you ever have got?

-A common comment that we get in recent reviews is
that journalists compare Dan Beehler's vocals to
Jacques Belanger's vocals.  They have their own
distinct approach to heavy metal vocals.  As long as
they're both good and capture the spirit of Exciter's
music.  There's no such camparison as who's a better
vocalist for Exciter.


Which is the difference of playing now and to play in 1978?

-Playing now with Exciter is a more comfortable
situation.  We play with more confidence and we really
know what our audience wants.  In the early days we
were always a bit nervous.  Especially me, John Ricci,
in front of a live audience.


Do you feel old in the rockworld or does the music make you young?

-We definitely do not feel old in this business.
Metal music definitely makes you feel young and
vigorous.


Is there any good bands in your homecoountry now(Canada it was or?)?


How have the metal scene changed during the years?

-The metal scene, since the 80's has dramatically
changed.  The new bands are more experimental and
willing to crossover styles, and unfortunately less
guitar solos!  Oh no!!!


I was on a Metallica concert some days ago and they managed to have 56000 in the audience, which is the biggest audience you have played to?

-The biggest audience, we've ever played in front of
is at Wacken Open Air Festival in Germany.  Attendance
of 30,000. 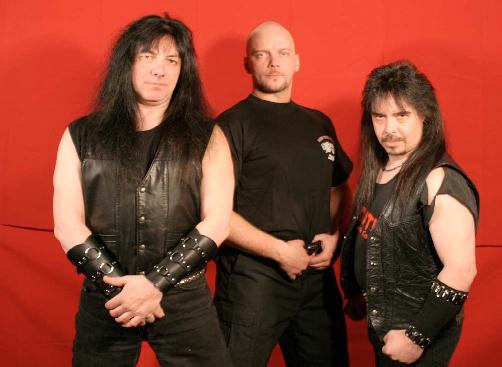 Which is most fun, to play in front of 100 persons who really like you or on a festival in front of 10.-000 but they don´t seem to like you?

-To us, it doesn't matter if there is 100 people or
10,000 of Exciter fans or not.  We always deliver the
goods, and always put on a great Exciter show.


Which is the most peculiar which have happened during your long career?

-I guess the most peculiar thing that happened in
Exciter's career so far is that the band has managed to
survive so many personal changes and that we are still
around today.  To me, that is an achievement.

5 Most important things in life: 1. Your sanity, 2.
Your health, 3. Your motivation, 4. Your ability to get
along with others, 5. To fulfill your dreams.

First, last and most expensive record ever bought?

-First record I ever got which actually was free
because I got it from a friend in school.  He had won
it from a radio station contest, but he didn't like the
record, so he offered it to me.  It was Led Zeppelin
II.  The last record I've bought was Lecuna Coil, it
was $27 Canadian dollars.


Most embarrassing record in your collection?

-I don't have an embarrassing record in my
collection.  To me, it's all good music. 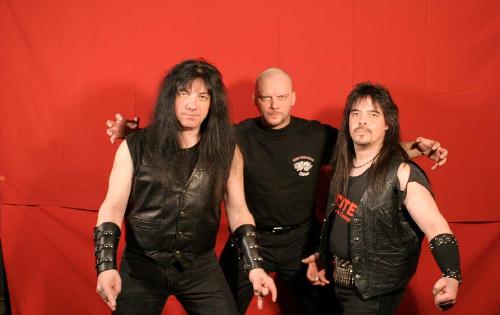 The record which changed your life?

-The record that changed my life was Exciter's first
record Heavy Metal Maniac, 1983.  This record made us
what we are today.


How is a good concert with Exciter?

-A good Exciter concert is a concert without any
technical problems.  For some reason, we are plagued
with equipment failure and guitar tuning problems.

-The average Exciter fan looks like they are really
into it and mesmorized by Exciter's energy and visual
performance.


Why Osmose? How does it work? Which other labels have been to?

-Osmose Productions is the best record company in
Exciter's career.  They are very supportive and honest
company.  They approached us in 1996 to sign with them.
Because of Osmose, Exciter has managed to stay in the
music market.


Which are your advices to an young band who wants to come up and get a contract and so on?

-There is no magical formula to get a record deal.
Just write the best music you can, try to sound
original, make demos, and send them to every record
company you can.  The trick is, not to give up.


Where do you stand when we´re talking about mp´3s?

-Mp3's could be a good thing.  They expose the band
to any part of the world for better or worse.

Are you downloading something yourself?

-I don't download, I don't have a computer yet!

-Our sales fugures are about average.  Despite we
are still an underground band with a smaller record
company.

- I know Sweden has a lot of Exciter fans and that
our unofficial webside is hosted by Peter Svenson
http://listen.to/exciter.  Peter has been a great
supporter.


Have you heard any good swedish bands?

-Based in Canada, we really don't have too much
exposure to other metal bands, especially from Sweden.


If you could choose five bands to have a big concert with, which five bands(dead and alive) would Exciter choose to play with?

-A wicked line-up for a concert would be, Exciter,
Motorhead, Megadeth, Judas Priest, Black Sabbath, and
Iron Maiden.


Which are the futureplans for the band?

-Plans for myself is to be dedicated to Exciter as
long as physically possible.

-Never give up on your dreams.  If you try hard
enough, you will succeed.

-A big thank you to all Exciter fans in Scandanavia
and the rest of the world.  Your commitment to Exciter
is unmeasureable.

Thank you Peter for the interview, see you on tour!