Please a little bit of history of the group?
-The band was founded in the summer of 94, but we had a different line-up
and played more old-school orientated HC in the vein of Soia or Agnostic
Front. After releasing two demos in 95 we did a mini cd in 96, a 7" called
"meriadan" in 97, a full length entitled "eternal mayhem" in 98, a split 7"
with Sidekick in 99 and a brandnew full length called "hit the ceiling" this
year. WE´ve also toured nearly everywhere in Europe.

Please tell me a little about every member in the group, age, family,
interests, bad habits and so on?
-We´re all just a bunch of normal HC-kids that love to play music. WE love
to go to shows, watch movies and meet with friends. That´s basically it. Bad
habbits... everybody has them, but who cares about ours?

You are/were out on tour with Cro-Mags, how is/was it?
-It was definitely the funniest tour we ever did. The Cro-Mags were very
nice people and we had a great time playing shows in England, Italy and
other countries. Sadly we got only 2 weeks vacation left from work so we
could only do 2 weeks with them but it was fun anyway.

What is the most peculiar which have happen under a gig in the audience
or on stage?
-During one show we played in Dresden our guitarplayer Lukasz fell into the
drumkit and we had to stop and rebuild the whole drumkit. That was crazy.

How is a good gig with Disrespect?
-A lot of friends come out and go crazy during our set. WE love it when the
people dance, dive and sing a long.

I got the Hit the Ceiling record from Hardboiled, have you done
anything more and how can I get it?
-I already mentioned all our releases in the first question. You can get
the ones still available through our website: www.disrespect.de!

It´s really unusual with this sort of band from Deutschland, why do you
think?
-I don´t think we´re kinda the only band playing heavy HC in Germany.
There´s actually tons of other bands playing that style of music.

Don´t we have to many Dis-band already?
-That may be true, but we´re in no way some sort of Discharge-clone. That´s
not where our name comes from. 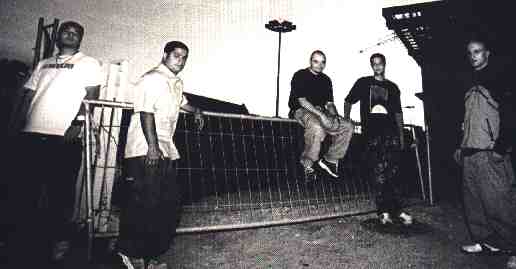 How is it to live in Germany?
-Except for the weather it´s pretty much ok, but you can´t compare living
in Berlin with living on the countryside in Germany. That maybe sucks, but
living in Berlin is cool.

Is there any good bands there?
-There´s Shortage who´re playing really metallic HC and there´s Should have
known who´re mixing melodies with Hc and Metal. Besides these bands there
barely any HC-bands alive, which sucks big time.

How is the political climat?
-WE have a so-called left-wing governments, but they´re actually running
the same kind of right-wing politics as every other party, so to me it
sucks. The rich are getting richer and the poor are getting poorer... i
guess you all know what i mean.

What about all neonazis who are runnin around there, what shall we do
about them?
-Individually: tell them that they suck and then eventually beat the shit
out of them. Politically: Dismantle their lies and educate people about
this.

How did you came in contact with Hardboiled?
-We send them a demo and they were interested to work with us. That´s
basically it.

Why aren´t you sing in german?
-Because we want to give everybody the chance to understand our lyrics.
That´s why we sing in english.

Whats the best and what the worst of being in band?
-The best thing is definitely being creative, having fun and meeting new
people all the time. The worst is getting barely any money for all the work
you put into the band, in fact you´re loosing a lot of money doing a band.

What do you know about Sweden?
-We know about the Elcks, the militant Neonazis killing people with bombs,
the Refused and that you have a good social-system and lots of snow in the
winter.

Do you know any good bands from Sweden?
-I personally like the old Refused and the old Abhinanda stuff plus i like
this old band Shield and this band Outlast. I also like the swedish
Metalband At the Gates.

In which way do you do music, does one of you do the music or is it
everybdoy...?
-It´s basically our two guitarplayers who´re writing the songs. The others
maybe add some sort of break or fill-ins but it´s basically those two people
writing the most stuff.

If you can choose a concert with bands (living and not living bands)
and you would play with them, which fuve bands would you like to play with?
-I´d ask the Cro-Mags, Vitality, Sidekick, Jimi Hendrix and Bob Marley to
play with us. I´d totally freak out on that and it would be a mixed billing,
too.

Which is the question you never get but you want to have, please ask
it and answer it?
-Which questions in interviews do you hate the most? I basically hate the
following question: Please tell us a littlebit about the history and who´s
in the band... That question is so boring for me to answer!!!

Is it many interviews, is it boring?
-It´s many interviews right now since we have a new record out, but it´s
not really boring except for some kind of questions.

Do you have any favouritezine on the net or on paper?
-I like this zine from the US called Rumpshaker and i also like Inside
Front zine. There are other cool zines, too, but these are my favourites to
read.

What shall a good fanzine contain, do you think?
-It shall inspire the reader to think. Not just through columns or opinions
but through some kind of spirit that must be present in the zine, in the
words you write. You can only do interviews for example, but if you ask good
questions they alone will make the people think.

What do you think about the new way to communicate with email and
internet and that stuff?
-It´s great ´cause it makes everything so much easier and cheaper. I can
still remember the times when i was writing one or two letters a day and
spending a lot of my money on stamps.

Do you have any favourite site to recommend?
-Our website. Just kidding. I like a lot of sites, but i can´t pick my
favourite at the moment. Sorry...

What does love, family, music and punk mean for you?
-Love means giving somebody else your heart without expecting anything for
it. Family is basically the place your born into - your parents and
everything. It´s nothing you can choose or create which makes it hard
sometimes. Music is basically emotions put into notes and chords and Punk is
basically anger, aggression and rebellion put into notes and chords. It´s
also a way of life in my opinion.

I forgot to ask you if Hardboiled is a good record company?
-Yes they are. They help the bands out a lot and do good work. They´re also
nice people.

Wisdomword?
-Think for yourself and live your life the way you want it.

Future plans
-To play a lot of shows, maybe tour again next spring and get my studies at
the university done.

Something more to add?
-Thanks for the interview. Shout-outs to the Cro-Mags, 0711-Posse,
030-Squad and all the other nice people supporting us.