Greg is a cool guy playing in the fabulous group Diesel Boy. I have interviewed Greg from the group and that was done in march 2001.

History
-The current incarnation of Diesel Boy (except for the Mike - Geoff
change on drums) formed as a result of melding Diesel Boy (Dave) with the band
practicing across the hall from Diesel Boy called Escape Goat (Greg,
Justin, Mike) in 1995. Geoff came on board from the Florida band Shyster
immediately prior to recording "Sofa King Cool" in 1999.

I have only Rode hard and put away wet, have you done anything more
and how can I get it?
-We have three other records all avalable at http://www.honestdons.com 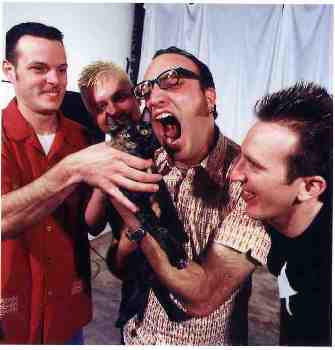 I describe you as a band with a typical american punkrock sound, what
other comparions do you get?
-A lot of people say we sound like the guy that plays guitar for spare
change at the entrance of the 20th and Mission BART train staion in San
Francisco....

Do you care about reviews, have you changed anything after a bad one?
-I like to read the bad ones, because they are more interesting. I like
to hear what people think and occasionally a point might be made that I
agree with, but that rarely comes to mind while we are in the creative
process.

Is Honest Don´s a good label?
-Honest Don's is a great place to hang our collective hat.

What do you like the other bands there?
-All the bands on Honest Don's have something to offer and there is a
pretty good stylistic variety so I would go so far as to say there is something
there for everyone, and if not there's always Fat...


What do you know about Sweden?
-Good bands come from there ie: The Satanic Surfers, No Fun At All (too
bad they broke up), Millencolin, Refused, and all the other bands who
practice all the time because it's so fucking cold there... We would really like
to get there sometime. We have a limited amount of time to work with this
year, so we will be unable to make it there, but we would love to see lots of
enthusiastic Swedes at say...one of our German shows....


Have you heard any swedish bands?
-Oops...I answered that in the last question.....


What does punk mean for you, is it only a word for you or???
-Punk is in fact, a word (often associated with another word - ROCK!!!)
which describes an attitude that is best defined on a personal level. I know
what it means to me, but it may mean something for someone else.....I guess
you just know it when you see it. 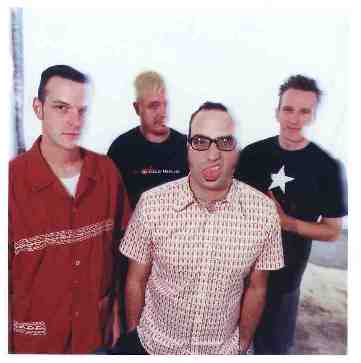 How would you describe your mujsic to anybody who never have heard
you?
-A thousand stampeding elephants - but it has a beat and you can dance to
it...


What drives you to play music?
-Sigmund Freud


Is it many interviews? Is it boring?
-I still find it strange that people wnat to interview us, so I guess
it's a real compliment, but sometimes it gets old answering the same questions.
If I occasionally seem like a smart ass that could be the reason...or it
could be that I'm just a smart ass.


Which is the question you never get, but you want. Please ask it and
answer it?
-I don't know the question, but the answer is 42.


How is a good gig with Diesel Boy?
-Hot, sweaty, loud, and hopefully fun....


What is the most peculiar which have happened on a conecrt with you,
on stage or in the audience?
-I got naked on stage in London last year....


Please tell me something odd which have happened in your career?
-We got signed at get to tour all over the place....


Do you have any bands on the side of Diesel Boy?
-I'm actually looking to kill some free time with a side project, but
haven't found one....Sweden is a long commute from Oakland, but I'm open to
anything...


Diesel Boy, where did the name came from?
-The inner recesses of Dave's depraved mind.

First and last and most expensive record you have bought?
-Most Expensive - John Coltrane Retrospective. I don't buy the least
expensive records I have...


Idols when you were small?
-Superman, Earl Campbell (American Football Player for the 1979 Houston
Oilers), Batman, and Aquaman


What do you think about the new way to commuincate with email and
internet and that stuff?
-Very convenient...I'm sure I'll be sorry when the Cyborgs implant the
chip in my brain, but I like my computer....when it's not crashing.....


Any site to recommend?
-http://www.thehun.net


How is it to live in USA, is it violent?
-Not as violent as many Europeans (and others) seem to think it is, but
occasionally shocking nonetheless. I live in downtown Oakland and even
though I regularly hear sirens I still feel fairly safe. Violence is
random
and fucked up wherever you are.

How is the new president?
-As far as I can tell....Evil (and stupid)


Is there any good bands there?
-Yes. Lots. See them all when they tour or come to the San Francisco Bay
Area and check them all out.


Please tell me about Santa Rosa?
-Santa Rosa is a nice place to raise a family. I lived there for about
six years, but I live in Oakland now. Oakland is much more exciting. Justin
and Geoff still live in Santa Rosa. I guess they like it okay...

Please say something I have forgot to tell you?
-Shave Your Nuts....seriously!