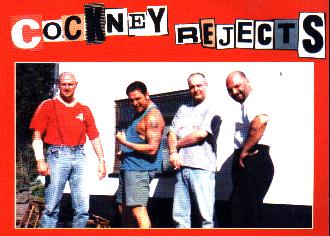 A very short interview with one of the greatest punkbands in the world took it´s place 14 march with Micky Geggus in a pub.

Why did you start to play again?
-Cash

When you did the Greatest hits vol 4, why not any new songs?
-The deal was to re-record old songs. There may be an album of new songs recorded later this year.

Are you going to play out now?
-Yes, we have already played in the Basque country (Spain) in January, shows are organised in Dublin and Berlin, and we are looking for good promotors to put other shows on elsewhere in the world.

When you see at yourself ,are you feeling old?(Me myself I is 37)
-No, I feel better physically now than I did when I was 20.

Does age affect the way of live ?
-Yes, it brings inner calm.

What does punk mean for you?
-An era of great music that ended in 1980.

Is there any good groups around in England right now, in the world?
-Don't really know, don't follow the scene.

What do you know about Sweden?
-It's a beautiful country, and I'd like to visit.

Have you heard any swedish bands you like?
-Abba

How is it to live in England right now?
-Crap

When you did the wild ones you went over to the hard rock style, why did you do that?
-Becuase that is the musical form I've always appreciated most, and grew up with.

The albums Quiet storm and Lethal, how can I get them?
-Lethal is available through Plastic Head (Rhytm Vicar) mail order.
Quiet Storm is not currently available, but if demand is there we could consider re-releasing.

What happened to Zonophone?
-Don't know.

When you sold the most how much did you sell?
-100s of thousands.

Have you done any new songs, if you have, how does they sound?
-Not yet.

To being interviewed is it boring?
-No

Which is the most boring question?
-That one

Which is the question you want to have but you never get?
-At what age did you begin to lose your hair ?

I understand that football is important to you, it´s still West Ham
which is the team or?
-I don't follow football anymore.

Why did it become West Ham?
-Because that is where we are from.

Can you be friend with an Arsenalfan or how is it?
-Yes

Are you having any new records you have boguht to recommend?
-Not bought a record for 10 years

When you were small,idols?
-Sugar Ray Robinson, greatest boxer of all time.

The first record ever bought?
-1972, Keep Yourself Alive, by Queen

What does following things mean for you  love, football, music, family?
-Love - family
Football - boring
Music - recreation
Family - love them all, but a pain in the arse sometimes, like all families

How is the Cockney rejects fan look like?
-Teenagers to fathers

Something more to add
-Hope to be playing Sweden in 2000. Do you know any good promotors ?

Wisdomword?
-Be true to yourself and you'll be true to others