I send Mike in Chixdiggit this interview and I got it back in some hours. I really like Chixdiggit and their poppy punk.

-we started out in 1991 when we decided we should buy guitars and start a
band. We came up with the name and made t-shirts. 6 months later we bought
our first guitars and then we played a show 2 months later. At that point we
realised that we should learn to play. It is now 9 years later and we sort
of learned to play.

Please tell me a little about every member, age, family, bands before,
interests, work and what you do when you don´t play?

Are you satisfied with your new CD From scene to shining scene?


What do you mean with the name on the record?

-There's a line in the canadian national anthem "from sea to shining sea"...
that's how we look at touring.

I know you got the question before but where did the name came from?

-The name chixdiggit came from the reason most guys start bands: chicks dig
band guys. we took the name to make fun of other bands.


Which is the question you want to have but you never get. Please ask it
and answer it?


You´re on Honest´Dons, is it a good label?You haven´t heard anything from
any bigger label?

-Honest don's is great. they let us do what we want, and they have good
distribution (as far as we know). as for bigger labels: when the time is
right maybe. For now we're happy where we are.


I wrote in my review of your new record that you sound a little like Green
Day and Undertones, comment?

-I like Green Day. I haven't listened to the Undertones. We get a lot of
Ramones comparisons, which I don't understand. A Ramones fan would be able
to hear the difference.

What other groups are you being compared with in reviews?

-Cheap trick (because we try to sound like we're playing in an arena I think)
and Ramones, early Goo-Goo Dolls (?) and even NOFX, something that makes no
sense to me.

Do you care about reviews?

-I like reading them, but I take them with a grain of salt. usually it's just
a reviewer trying to tell people what he likes. it's more about him/her than
about the band.


Have you ever changed anything after a bad review(but you never get any I
hope)?

-Sometimes we are told in a live review that we talk too much on stage. Next
time we play that town we tend to talk even more. 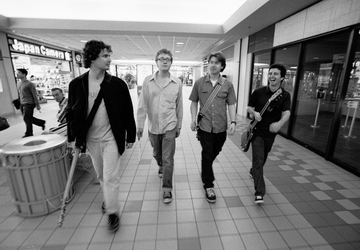 -Considering I lived in the Netherlands until I was 16, not a lot... I eat
Knackebrod sometimes, and notchokolat and then there's Volvos, Ericson
phones, IKEA (did you see that great scene in fight club), you have 24 hours
of light in the northern parts. I know that people like to talk about
swedish blondes. Saunas. Lego (or is that denmark?... it's denmark isn't
it?) You have a good social government with high taxes and you take care of
your poor and elderly.

Have you heard any swedish groups?

-We toured with the guys from Satanic Surfers. We've heard Abba, Aqua, Ace of
Base. Don't feel bad. We have Celine Dion.

Have you been outside Canada and played, in Europe? What´s the difference
between the audience in Europe and in USA/Canada?

-We played in Europe for 3 weeks late last year. We're coming back in 2
months. (Sweden too!)
The audience isn't much different. They like to party.

Is there any good bands in Canada? 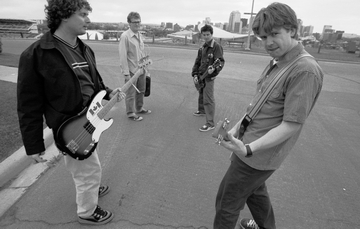 Is it good to live in Canada?

-Yeah I love Calgary. It's almost always sunny. the mountains are an hour
away, so when it gets cold we snowboard to get through the winter. We all
have nice places to live because Calgary isn't expensive yet.

How is the politicans doing their jobs?

-I don't pay much attention. I;m not a canadian citizen, so I can't vote
anyway.

You´re interested in hockey and then Calgary Flames I think, have they
had any swedish players?
-I'm sure we have some swedes that the other band guys could tell you about.
I can't think of any.

Idols when you were small( both in hockey and music and so on)?

-Michael Jackson (remember I said I grew up in Holland)

First and last record you bought?


Five most important things in life?

Most important things in life: my band, my work, my family, me, happiness
and health.


Do you buy many records? The most expensive record you bought?

-I hardly ever buy records. I get some free records from friends' bands. I
listen to those a lot. I spent $35 once on a soundtrack for Russ Meyer
movies. (Faster Pussycat, kill kill) It had great pictures in it.

KJ Jansen write all your songs, can you other guys stand behind him and
feel like that they´re are your songs?

-Yeah pretty much. Since we're together on tour a lot, all the songs are
about things we have experienced together. 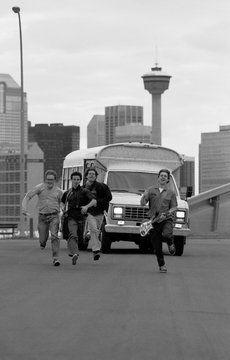 Not any comments on his writing sometimes?

-Not really, I like most of it. If I had any advice for KJ I'd tell him to
have more faith in his own songs. He second guesses himself sometimes. I
think he's getting better every year.


How is a good gig with Chixdiggit?

-It's as big of a party for you as it is for us: everybody gets laid, drunk,
spends a ton of dough, meets new people and talks about it for a long time.

-15-35, a little on the nerdy side... the cool kids arent' too sure if it's
acceptable to really like us. Nerdy kids don't care and just party.

Do you have good contact with your fans, in which way?

-We always hang out in the club after we play, so if anyone wants to shoot
the shit, they can just buy us a beer and tell us what's up. I spend a fair
bit of time answering questions on icq (#27100213) and we answer a lot of
letters.

You have a CD-rom part on your new CD, why ?

-"Just because we can"... I started learning how to do that last year. I
thought it'd be cool to share some movies we'd filmed.

You have done it, are you working with that sort of things? Is it you who
does your website too? Is it important to have a website?

-I learned to do the stuff because I wanted to make a band website and then a
cd-rom. Eventually I got offered a job by some people that saw my work. I
now work at a multimedia company doing computer based training and websites.
I like having a band site so people can see what we're up to if we havent'
been to their city for a while. I don't think it's super important, but I
like doing it.

What do you think about the new way to communicate with email and
internet and that sort of things?

-I think it's great. It doesn't replace real social contact, but then I also
know lots of people who got married because of the internet, or badns that
got to travel because of internet contacts.

-I read www.theonion.com every week.

What shall I think of when I do a homesite?

-Put your news on the front page.

Have you done anything more than From scene.... and how can I get it?

-That record is our 3rd. you can order the other 2 on cdnow.com and through
our website and through www.honestdons.com etc.

-Sometimes. but you're swedish, so that is a new territory for us. that makes
it interesting for me.

-I want to keep doing the band and meanwhile continue on with my job. Just
being in a band would be boring, but getting to switch with my computer job
is great.

-Feeling good makes me feel good. here's to feeling good all the time.

Something more to add.