In late 1996, we all played in various local bands around Vancouver.  We
quit those bands and drove to Las vegas as friends and came back as The
Cartels.  We've been touring and recording ever since.

Please tell me a little about every member

You´re on Lucky Seven in Europe do you have any other label over there?What have you done excpet Kingpin and how can I get it?

We put out a 7" vinyl in Germany on Middle Class Pig Records with
Fuck You and Another Friend.  You probably have to get it in Germany.  We
are signed to ST2/Universal in Brazil with Kingpins, and we've gone through
a couple of indie labels in North America.

How is life in your country right now?

Life is good because summer is here and we're going on tour.  Touring
Canada in the winter is fucking dangerous.

How is the punkscene nowadays?

The "punkscene" is still the same as it has been the last 4 years except
there are fewer places to play in Canada.  I like that the "punkscene" is
becoming the "rock and roll scene" again with bands like The Hellacopters,
and Nashville Pussy.

What do you know about Sweden

Aren't The Hellacopters from Sweden?  And of course I have to say thanks
again for ABBA.

What does punkrock mean for you?

No Rules. No income. 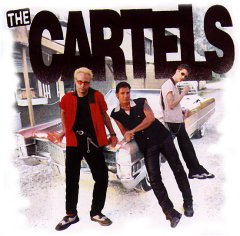 When somebody ask you, what music do you play, what do you say?

I just play the bass.  The Cartels keep us all to busy to play in any
other bands.

Kid Rock- Devil without a Cause
The first record you bought?

ACDC- Back in Black


Are you spending time with the other guys when you don´t play?

No I hate them both.  Especially Dave.


What are you doing when you don´t play?


How is a good concert with the Cartels?


You and Brian does the songs, what´s difference of your type of writing and of Brians?

Our influences.  Brian writes very old school punk because he loves
bands like The Ramones and The Clash.  I tend to write more bluesy rock and
roll because I love bands like The Stones and ACDC.


Is there any good lyricwriters you like? Don´t you care about your lyrics or do you thinksít´s important?

Lyrics to me are kind of secondary.  Obviously they are
somewhat important, but if a song has great melody I like it.  Louie Louie
by the Kingsmen is a good example of that.


Which song are you most satisfied with, musically and lyrically?

I Miss You.  I like it because lyrically it is to the point and it's
only 3 chords.


Are you often out and play?

We've done a lot of touring throughout North America.  Recently, we
just finished recording and mixing our second c/d so we've only been playing
live in Vancouver.  But we are back on the road this summer.


Have you been to Europe?

Well, I was born in West Germany but I only lived there for 6 months.
The Cartels haven't played there yet.  Maybe this fall?

There havebeen more interviews than usual since we signed with Lucky Seven.  But
that's a good thing.


Is it boring to be interviewed?


What do you think about the new way to commuincate, with email and internet and that stuff?

I think the internet is good.  It is a great way to communicate because
it is so fast.  I'd like to learn more about how to use it though.


You have an own homesite, who does it?


Do you have any favourite homesite when you look on internet?

I want to play in the NHL.

Thanks Peter.  Maybe we will see you this fall.