Bristles was one of my favouritegroups in the middle of the 80´s when I was young and beautiful and nowadays I´m only beautiful. Svegis in Skalatones/Negatives remember the old tomes and welcome to this nostalgy thing.

A little history of the group, thanks?

-We was formed back 1982. I was playing in a group which was playing more psychic/gothrock with only depressive influences,Dada 36. I heard the new wave of punkgroups in the beginning of the 80´s and was inspired of them. The groups took the music out on the street again. Because many punkgroups have begin to play new wave and the music was complicated. JThe new bands showed us that everone could put together a punkband. It´s was very positive. It was to quit Dada36 and start finding people to Bristles. The name is stolen from  GBH’s first 12”, ”Leather, Studs, Bristles & Acne”.

Which was the other member and what are they doing now? Did you or some of the other gus played in any other band in the same time?

-Fom the beginning it was members who was jumping in and out from the band. But with the first ep Don´t Give up we have a really stabile ground with me on guitar, Viking on vocals who we´re kicking out because of his political views. Ingemar Hurtig on bass. We didn´t play in any other bands and the other ones don´t play in any bands now either. After Viking Puma came with us on vocals. He had played in Black Uniforms and he lives in Gothenburg now. I don´t know what he is doing musically right now. We haven´t any contact nowadays but we´re meeting each other sometimes and dream back...

How would you describe the music you did back then?

-Fast punk,more will than knwoledge. Excactly as I do now I like a mix of fast and some not so fast songs. We were very inspired of  Exploited, Blitz, Partisans and GBH .  I was very fascinated of the new fast part that band was playing in. It was only some groups which have some songs in this tempo and then it came a whole bunch of bands with bands which was playing so fucking fast and aggressive which was fascinating me much. 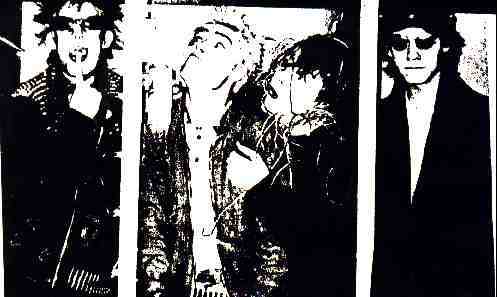 And then a lot of compilationcasettes on Ägg Tapes and own cassettes and some I don´t know about..

Isn´t it someone who wants you to start play again?

-We did a gig on Bollnäspunken –98.It´s enough! I think personally that it´s to many bands which is reunion again. Almost every punkband from the good old time plays again. It´s not good. Please let a dead dog lie. The latest band which have done a reunion is my old heroes Cockney rejects and they start to give out a CD with old songs rerecorded, which sounds like shit. Haven´t heard it myself but I have read in some reviews in zines that it is so. It seems like they have got an extra plus for the name. The old bands take to much place isnetad of the new bands. The labels gives more money to old bands which is selling some thousand more than a hungry new punkband. Many of the old bands which is reunion don´t do any new material and are only travelling around and show themself up. But in a way it´s not anyone who wants to hear any new material with the old groups, only the old things. Sex Pistols reunion was too much...but there´s the money who is making it....

Why did you changed your name to Bristles DCon your last record?

-New memeber and I wanted to continue in the same was as Bristles was in the start. I didn´t want to lose a name which people knew, DC means late reunion and that was what I wanted but it did only manage to be one record on Rosa HOnung Records. "Free The Prisoners".

Punkscene back then was really big, where were best to play in that time?

-Big I don´t know, I don´t think it was so big but you did things as a undergroundthing. Of course bands like Clash, Ramones, Jam, SLF, Sham 69 was playing on big scenes but it was in the late 70´s. we played really often out but it was only for money to pay our travellings. But we was so young so it was OK for us. we have played in the most cities and in different small towns. It was almost fun everywhere.

Which was the best bands in Sweden at that time?

-Sötlimpa, EATER, Asta Kask, P-Nissarna…it was many bands which had good songs but the msot of the bands released their own record. It was no label we could be one like it was in England and in other countries. In sweden it was a little underground. I think that many bands split up because it was difficult to do everything by theirself. It´s also a question of economy.

I liked the british punk the most and didn´t think the swedish was so good. It was depending of that the swedish records didn´t have so good quality and they was recorded in some old studio out in the country. I didn´t like the american so much either.

Whats´the different between punknow and then, and what does it mean for you now and thenj??

The punkmovement have been around for 2o years now, so it´s my life. In the beginning you were shocking people in the way you look liked and it was maybe an uniform but a coll uniform. It was so back then it was very much unity between punks in that time. Then it was only one punkstyle and now it´s many different styles and genres.  It ´s better to be united against the society. And then was all new. And then I don´t know if I have called myself a punk sometime because I have been what I felt for and I have listened to punkmusic. For me means punk to be engaged in things, maybe do a zine, be in a band or protest to something you think it´s wrong.(which a big part in todays society is) to be the one who go against the smainstream. Think as an individual. But all this is very difficult, it´s easy to be one in the wholeness. What I never have liked is all this money which is controlling people´s life. It´s not fair.  The world sucks!

Why did you quit playing with each other?

-I don´t really remember but I remember a litle about which way to take musically. I think that Puma and I didn´t reall come along so good. I wasn´t so easy to have to do with when I was younger. If I didn´t get it my way I did a lot of noise. But maybe it was the lack of success, what do I know, and when you start to play with each other when you´re so young you grow away from each other.It´s really natural. And what I remember so was the punkscene really inspired of the metalscene at that time ,in the mid 80´s. Groups like English Dogs, Discharge and groups like that made meatlrecords and that did the punk very uninteresting I think. But if this was the rerason I don´t really know. And then groups like Metallica and the bands came and my mates really liked it I didn´t wanted to be with them anymore. I can´t listen to that sort of competitionmusic. I couldn´t listen to fast music for many years but when rancid came in the mid 90´s I started to listen to punk again. The second half of the 80´s wasn´t so good when you think about punkrock, it was many black years. But as you say the wheel goes round and round.... i

How would you sound if you was playing today?

-Hypotetic question. But of course it would be punk for gods sake..

Why did you sang in englsih and not in swedish?

-Some people can do it good in swedish but it ´s not easy. English sounds cooler and it´s maybe easier to write a song in english than in our own language where you can understand every word. It can be a little nerdy. we did actually a song in swedish which would be on really Fast 2 but it didn´t make it. Unga och Arga was the name of the song.But they took Nowhere instead.

-That you came out and met the same people as yourself Itw as fucking fun. Maybe we drank to much . But it´s maybe have with the youth time to do. I had some problem with booze and it was maybe to much boozing sometimes and the audience wasn´t give a damn about the band sometimes and it was more fun to be outside the building and drink. I was in the same way myself,a dn it was a very good time.

-It is waht I think today, back then I had surely thought something else?!

Bristles – Don’t Give Up (very good)

Asta Kask (canm´t find any single with them, I must have lost them when I was drunk, where the hell are them????? I remember when I heard them on Ny Våg with Jonas Almqvist and they have meant a lot for me)