Craig Hayworth from scottish Bovine took long time to get but here is his answers to my faboulous questions. It took place 20/9-2000

-We've been together as Bovine for 2 years come this november, before that it
was a high school band doing covers of songs that the band liked in Davids
garage, we decided to get serious about the band so we hired a practise room
in Falkirk and practised some songs that David had written intill we thought
we were ready to play them live, then we blagged our first gig on 5th feb 99
at the engine room in falkirk after we getting the clubs owner to come down
and hear us play in the studio, we played tons of gigs at local venues and a
few across the rest of scotland, we recorded our demo on 20th feb 2000 to
send out to promoters and zines we also managed to sell a few at gigs, we
are currently planning a small english tour supporting shatterhand in
december, we are currently auditioning new drummers because Steven had to
leave for his job

How is punklife in Scotland?

-Pretty good, its starting to take off, in Falkirk there are lots more people
starting to take an interest in the live music scene, and lots of great punk
and metal bands playing, only on a small scale right now but its getting
bigger all the time

-Turtlehead are really good, and Shatterhand are great as well everyone
should check out these two bands from Falkirk

-Not much, its near Norway i think, and Millencollin come from Sweden

Do you know any good swedish bands?

What do you think about Celtics Henke Larsson?

Why didn´t Scotland make it to Euro 2000, you have done much better than
England there or...?

How is a good a concert with Bovine?

-Lots of jumping around, lots of fast pop punk, we just try to enjoy ourselves as much as we can when were
playing and get the crowd to have fun 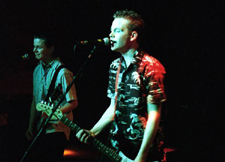 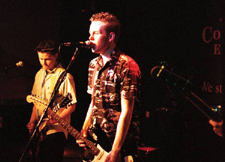 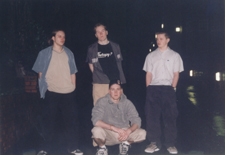 What have you done excpet the demo CD you sent me?

-Thats all weve recorded so far but we will be recording again soon, apart
from that weve been drinking a lot!

Have you heard anything from any labels?

-We got a good review from a small label called Potato Print Records, but no
five album deals yet

I compare you to Mega City Four, Senselss Things, what other comparings
have you heard?

-We´ve been compared to the Clash(?), Blink182 and Speedowax, but we dont
think we sound like any one band we take influences from lots of bands but
try not to copy anyone

Why do you play this sort of music?

-Because its fun to play and its the music we all listen to, and its easy to
play aswell!

What the most frequent asked question?

To be in Kerrang , have it made anything possible for you?

-Yeah weve made a lot of contacts and been offered a few gigs in England, we
had a lot of people asking for copys of our demo and a few that even liked
it

What does Bovine mean?

First record you ever bought and the last one?

What do you think about the new way to communicate, with email and
internet and that sort of things?

Do you have an own site, any favourite site?

-Tour England in december starting on the 15th at the
Indian Queen in Boston, record a new e.p, gig loads and try to find a way
of making a living doing this