Zac in Big in Japan answered this questions in the beginning of april 2001. And after some questions Toddball joined and said what he thought about things.

History?
-The band started in July of 1999 with 2 different members. Matt Levine
(guitar, vocals) and Ross Levine (drums, vocals). After the band signed
with Honest Don's, Matt and Ross left due to career and other band
obligations. Enter Corky on drums and vocals. After we recorded the album, we picked
up Toddball on second guitar and that brings us up to date.


Please tell me a little about every member in the group, age, work,
family, interests and something bad about everyone?
-Toddball is 26, unemployed, is single, a computer geek, and doesn't
know how to change the strings on his guitar. Fuckin' Joey is 33 bro, works
odd jobs, has a girlfriend and 3 four legged, hairy black kids, is a
womanizer and a recovering pot-head. Corky is 31, a door to door salesman, is
married (sorry ladies), a sexaholic and gets a little too excited about our
band. I,
Zac, am 28, very, very recently unemployed, have a girlfriend, have no
interests and am currently a fucking asshole. 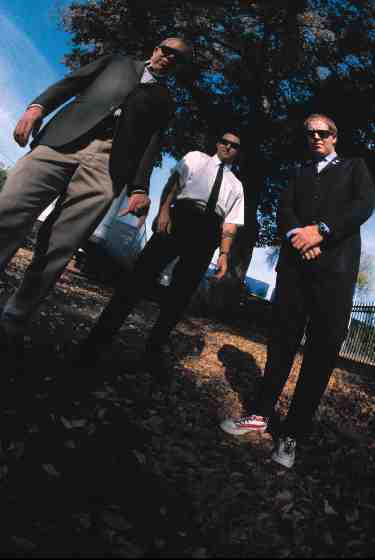 You are being compared with Elvis Costello on many places, what do you
think about that, other comparions you have get?
-I am very flattered to be compared to Elvis Costello and have a great
amount of respect for him. We have also been compared to Green Day.


Do you care about reviews?
-I try not to care but they sometimes get to me.


Have you changed anything after a bad review?
-We recently received a review that wasn't necessarily a bad review but
the writer offered a lot of constructive criticism that I'll probably keep
in mind when we record our next album. 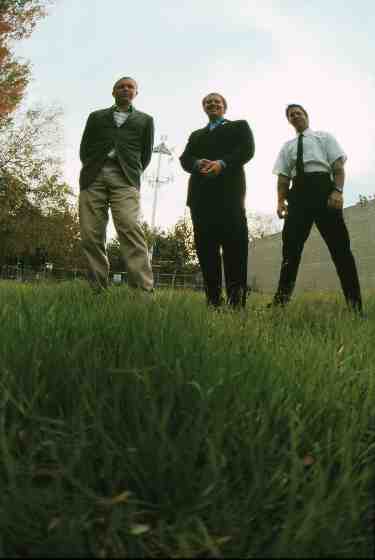 Big in Japan, where do the name come from?
-Rock N Roll has-beens tend to keep their "fame" in Japan. It's a silly
rock `n' roll reference and it sounds cool.


Have you done anything more than the last album you put out on Honest
Dons? If you have ,how can I get it?
-Nope.

Is Honest Dons a good label?
-Honest Don's is a wonderful label and everybody there deserves a big,
fat kiss.


What do you know about Sweden? What is typically swedish?
-I don't know much about Sweden. Black Metal and beautiful, voluptuous
girls?


Have you heard any swedish bands worth to mention?
-Starmarket and Refused.


Is there any good bands in your homecountry?
-Too many to mention. 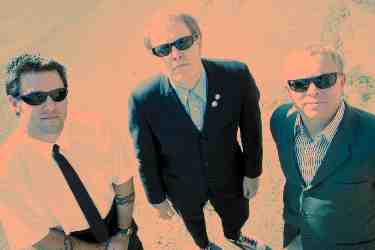 You´re playing mostly pop or what do you think, what are your
feelings about punk?
-We are definitely more of a pop band than a punk band. But we all love
punk rock music.


How ís a good concert with Big In Japan?
-When the audience doesn't throw things at us, none of us break a
string, and I don't forget my lyrics. That's a good Big In Japan show.


How does the average fan look like?
-Hairy, protruding brow, slouching posture, dragging knuckles, and they
speak with grunts and hand gestures.


You have an own website, or? Is it important to have one?
-Yes, we have our own website. It can be found at www.biginjapan.net.
And, unfortunately, it seems to be expected these days.


What do you think about the new way to communicate with email and
internet and all that stuff?
-We find it very useful and helpful. But you have to wonder where it
will all end. I mean, how much convenience do we really need?


Any favourite site yourself?
-I find ebay very useful.


What is the best and whats the worst of being in a band?
-Best things: meeting new people, making new friends, and
creating/playing music. Worst things are driving, the countless hours in the van, and
being broke.

Idols when you were small?
-(Zac) Angus Young (AC/DC)
-All my idols were skateboarders when I was younger. Like the Bones
Brigade and other 80's pro skaters.


What is the most peculiar which have happened on a concert with you,
on stage or in the audience?
-(Zac) playing with Common Rider and drawing a total blank on every song
and looking like a complete jackass.
-People actually cheering for us like in Santa Cruz.


When you write music, which is most important, is it the music, the
lyrics or is to have a refrain that people remembers?
- All of the above. Equal parts of each is essential in a great song.


Which are the best lyricwriter in the world?
-(Zac)Blake Schwarzenbach (Jawbreaker/Jets To Brazil)
-John K. Samson (The Weakerthans)


Can music change anyones life?
-I'm sure it could.


What do you think of mixing politics into the music?
-If you can do it in an informed and intelligent manner then great, if
not then please don't bother.


Which are the future plans for you?
-Lots of touring, writing songs for a new album, and recording a new
album.


For the band?
-See above


Is it many interviews, is it boring?
-We haven't had many interviews as of yet, but we are still a new band.
But it is boring when they ask a million questions. Just kidding.


Which is the question you never get but want to have, please ask it
and answer it?
-Zac- Is it a burden being such a brilliant songwriter? No, not really
-Toddball- Is it as small as all the other asians'? Yes


Something more to add?
-Maybe a little Paprika.