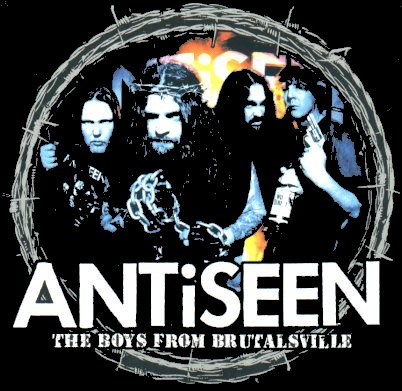 Antiseen is a very hard group which have been played with GG Allin back in time. here´s an interview done in october 2001.

CLAYTON **** We formed in 1983. Have toured Europe and the USA since then and have a discography of over 50 releases.

Please tell me a little about every member , age, something bad about
every one, family and interests?

****Joe Young is our guitar player. He and myself have been part of ANTiSEEN since day one. Joe is also a politician running on the Libertarian Party ticket in his home of Caldwell County, NC. He is an avid Jerry Lee Lewis fan. He is married and  does alot of very strange things.
****Sir Barry Hanibal plays the drums.Sir Barry has become somewhat of the musical director in the band over the last few years due to the fact that my hearing is shot and cannot be trusted.Sir Barry is a huge fan of the finer things in life....such as wrestling, planet of the apes, and good ole rock n roll!! He was knighted in Holland by myself and has joined the ranks of the knighted with his fellow countrymen Paul McCartney and Elton John. You can tell hes British by the way he talks. Sir Barry is married and has one daughter.
*****Doug Canipe has been on bass duty for a little over a year now. He fronts his own band Cronic Disorder and is the one responsible for our great web site (www.antiseen.com).Doug has so many interests they could not all be listed in this interview....though he does have a soft spot in his heart for midgets. He is single at this time but that could all change the next night he gets good and drunk. He is also a sucker for Wild Turkey whiskey.
*****I am Jeff Clayton AKA: The Longhaired Weirdo. I started this musical (?haha) monster with Joe Young. I have been known to do some self destructive things during our stage shows. I am a big fan of great art and literature like wrestling, country music and wrstling and porn magazines that feature a whole bunch of pictures and little to no writting. I am married and have two daughters.

You have been on the road for a long time, what´s the difference of playing now and then?

****We are older now and prefer to play shorter shows. We are as mean as ever...but our attention spans and tolerance has dwindled down to nothing. We drink more now.

Was it better back then?

****Somethings were and others are not. We actually are able to be a little more  shrewd in our business dealings to assure not getting ripped off like used to happen in "the good ole days"!!!

****Doing what we want the way we want and not worrying about breaking any rules ESPECIALLY those created by PUNK!!!!


If you describe your music with three words, what do you say then?


What´s most important to have a good melody, a good lyric or to have
refrain which people remember?

****If it makes you tap your foot and wanna sing along...OR...as in cases we've seen, make you wanna act like a complete idiot and tear shit up then I think you have acheived a good song.....at least by our standards.


Who does your songs and how do you do them?

*****Joe, Barry and myself come up with the bulk of it. Barry and Joe both have contributed songs that they wrote both the music and lyrics for. Otherwise we put the music to my lyrics or some thatw e all contribute or cowrite with outside people. 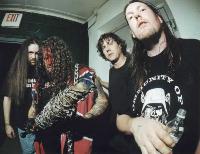 Do you do many covers?

****Yes. quite a few . ranging from The Ramone to the Kinks to Alice Cooper to Curtis Mayfield or Sun Ra.


You have been on many different labels, why?


You worked with GG Allin back in time, how was it and how was he?

******GG was very professional in the studio. he did not shit in the vocal booth. 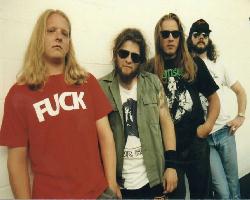 Have it helped you that you played with him once upon a time?

*****Some times it seems like thats all people wanna talk about. I dont regret those days at all, but we have done more than just that. We miss GG alot though.


Which is your best record?

******I think the song title we hear most at shows is "White Trash Bitch"...but we never play it though, just out of meaness.

First, last and the most expensive record you ever have bought?


What do you think about the things which happens in SA, Afghanistan
and so on right now?


Don´t you care about politics?

****Not really. Some topics are intresting and raise some important things to think about for sure. 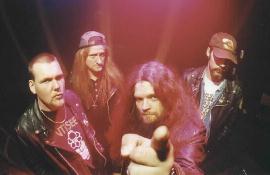 ****Well built, tan, blonde, muscular,drives a BMW, makes over $50,000. per year. Occasionally we will get some backwoods looking good ole boys and some wild ass beer drinkin chicks at our shows.


Do you have good contact with your fans, in which way?

****Seriously, yes we do. we like to talk to them in person. We try our best to answer each and every letter or email.


How is a good concert with Antiseen?

******That usually results in me being a bloody mess with thumbtacks stuck in my ass and back!!!!


Which is the most peculiar which have happaned on stage when you
have played or in the audience during a concert with you?

****Too many to mention only one. we've seen fights, stabbings, sex, lots of crazy shit. we are grateful for our entertaining audience.


What drives you to play music?

***The love of what we do...not to mention stubourness, and meaness!!!! Plus the pleasure that making people that hate us uncomforatable brings us.


.Is it boring to be interviewed? The most frequent asked question?

*****Sometimes...but we enjoy doing them. We get asked the most if we are racists.


Which is the question you never get but you want to have, please ask
it and answer it?

*******Hmmmm....OK. what do you think of liberal cry baby writers that think you guys are nothing but a bunch of racist morons? JC: they can kiss our goddamned asses.


What do you think about this new way to communicate with email and
internet and all that?

****I really like it myself. I couldnt imagine being without it now!!!


Do you have any website yourself? If you have who does it and is it
important to have one?

***Yes we do. www.antiseen.com  Is done by our bass player Doug Canipe.


How much do a group of your caliber sell appproxiemately?

*****Hell I dont know. The labels dont seem to have ahard time getting rid of our stuff. Id guess in the 3 -6 thousand range.


Can you live on your music?


Future plans for you a s a human being?

****Try to get as much out of life before it all comes to an unexpected abrupt end.


Future plans for the band?

*****To release SCREAMIN' BLOODY LIVE on TKO records in january, plus a split with Hellstomper on Steel cage Records.

*******Every GREAT music collection has ANTiSEEN releases in it!!!!


Something more to add

*****Thank you for the interview and take care