Here´s an interview with the fantastic poppunksters in 98 Mute, it is Justin(the drummer who have answered my questions  in the middle of june 2000)

- 98 Mute started in 1994 when me and Jason(guitar) started jamming in my
house. then Doug (bass) wanted to learn to play so Jason taught him . We were
all friends in highschool a couple years before. We stared writing songs and
i was singing and playing drums.  then we got Pat who we knew from high
school to sing . We got some songs together and played parties. Then we put
out our first album in 1996 on Theologian Records because we were friends
with the owner, Marc.  Then we went on tours and then we recorded 'Class of
98' in 1998. then we toured again and then got signed to Epitaph. Then we
recorded 'slow motion riot'.

-Justin is 29 and works as an accountant when not touring. Graduated from
college 5 years ago. he is the stressed out one in the band and pretty much does everything .
Doug is 28 and is a substitute teacher part time.  graduated from
college in 1995.  he has diabities and is the sober one in the band.
Pat in 28 and is going to law school.  he doesnt drive on tour because he
is a shitty driver so he pretty much does nothing but sing.
Jason is 27 and hes going to college now . he is the hyper and grumpy one
in the band.

What did get you to make this music and why the people which in the group right now?

- We pretty much grown up with punk rock . It is pretty much my life since
1981.  we all knew eachother in highschool and we all liked the same music.
we are all good friends of Pennywise (my brother started the band, Jason(our
guitarist) used to live with Byron and im best friends with Fletcher).

-The best is the process of creating a song and then recording it and then
having people like .  also seeing people sing our songs when we play live.
The worst is the fighting that the band goes through because we all have
different personalities and do things differently.

Are you satisfied with your latest album Slow motion riot?

-This is the first album that we are all satisfied with.  We think this is
our best alby far.  Then playing is our best and the songs we really like. 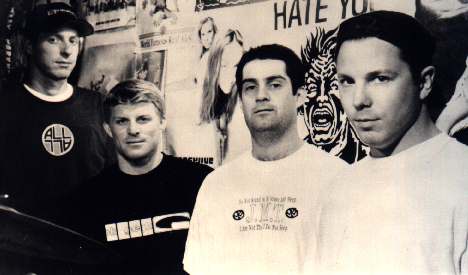 -Weve done some compilations and also our first album which is self-titled
in 1996 is on Theologian.

-It's different for different kinds of music but for punk rock i think the
perfect length is 35 min. and about 14 songs.Personally i think the perfect record is the Pennywise  self titled album for personal reasons. I also think
ending with an anthem like "bro Hymn" is the perfect ending.

How is the punkscene in USA right now?

-There are a lot of different punk  scenes (hardcore, skate, pop, etc..) i
guess its good and I'm proud to be a part in it but i think is has lost its
relevance. and a lot of it is over commercialized. Its hard to explain but
what makes me mad is that the younger generations don't know the history of
punk. I'm kinda of like a punk historian and have done many papers on punk
rock etc... Ijust wish people would learn about the music and not just listen
to it. I am kinda disillusioned with the scene nowadays because there are so
many different factions and they give eachother a hard time and try to be
punker that the next guy - who cares ? just be yourself. I can talk forever
on this subject....

- The bands that are around today that i like are very few.  I listen to
older stuff mostly. but some bands i like that are still around are Dwarves,
AFI, Tool.

- I have been to Sweden about 5 years ago when i went with Pennywise and i
thought it was the best country we visited out of all of Europe.  I am not
just saying that either. Sweden is so clean and the people were so nice. Iwas
doing merchindise for PW and it was hard with the money  and these people all
helped my out and were so nice.  Also ,not to sound sexist or anything , but
the women over there were so beautiful.  We would go to Mcdonalds and see
beautiful girls behind the counter . it was such a culture shock.  I've told
people ever since that if there is one country that i want to go back to it
is Sweden.

-There are alot of good swedish band We have toured with Millencolin and
have hung out with No Fun At All. also the two cd's that i am listening to
constantly is Refused and Intl Noise Conspiracy. Ithing those guys are
geniuses.

-We have always been friends with the people at Epitaph because of the PW
connection. So they got to know us and liked us.

-I think it is they have always been really cool to us even when we weren't
on the label.  Some people give it shit but i have nothing but good things to
say.

How is a good concert with 98 Mute?

-We really feed of the crowds energy.  We have fun live and we screw
around a lot . its just a good time between us and the crowd.

Do you have good contact with your fans you think?

- I think we have really good contact with people . we are just like them
. We are fans ourselves.  We dont say "fans" we always say "friends". because
thats what they are We always talk to them and email them

What do you think of the new way to communicate with email and internet and that stuff?

-I think is easier but i am really not good at it . i am not a good typer.

Do you have an own homesite?

- If you have who do it? yes our site is www.98MUTE.com    our friend Shane Rodack does it. He  also does Pennywise and Zeke.

Do you have any favourite sites by yourself?

-I don't really surf the internet but the funniest site is www.Mulletsgalore.com

-No, we don't do that many interview  but a lot of them are boring . People
in Europe ask better questions. You guys ask a lot of different kinds of
questions so its fun doing your interviews.

Is it mainly fanzines who does it? Do you have any favourites on the zinefront?

-Some of them are fanzines, but not most of them.  I don't really know of
many fanzines today.  There are not many around the USA today.

How is to live in USA nowadays?

-I feel very fortunate to live where i live . but as with anyplace there
are bad points and goods points. but all in all i think is is for the best
but there are a lot of things wrong too many guns, too many jobless too much
hatred. all you can do is be the best person you can be and try to make it a
better world for everybody.

How is the political climat?

-The political climate is a joke  like it has been for about the last 30
years. everybody is bought out and all they try to do is get re-elected. they
do what is popular not what is always right.

What do you think of the following things?  Bill Clinton, Racism, American food, Ramones, Iggy Pop?

-Clinton is good compared to all the rest , I guess. he has helped our economy but he is so fake. Racism is bad in this country . this country was built on racism and so it will never go away. All you can do is try to educate people .  It is too big of a problem for any individual to cure . I just try to treat people with respect no matter what race they are. But once they disrespect me then "fuck 'em".   I love amercan food .  the Ramones
were punk before  the Sex Pistols made it popular . They play such simple
music but it is fucking ingenious and they rule!  Iggy is insane and a
pioneer.

What does love mean for you?

-Love means wanting to do anything for that person and trying to help.
Accepting faults want to grow old with that person.

- What does punk mean? i could write an essay on that.  i can tell you what
its not-its NOTwhat type of music you play , what kind of clothes you wear,
how you wear your hair , how many tattoos you got  , etc... Punk is just
being yourself and doing something for yourself . it is standing up for
yourself and not begging for handouts. it is about creating your own life and
doing something you like. it is an attitude and nothing else.

Is the word punk more important for you nowadays and what did punk meant for you in the past?

-Punk meant more to me when i was young because i think it meant more in
general.  Punk used to be a lot more rebellous and a lot more relevent than
it is today. But that's just my opinion . things always seem better "back in
old days" but it doesn't mean they were.

The last record you bought? And the first one?

Have you bought any really expensive record?

-When i was in 8th grade i bought the original Dead Kennedys "In God We
Trust"   LP  for $22 dollars which was a lot for me at the time.

-Hopefully people will like the album and were going on a US tour with
Guttermouth in July for a couple weeks and then maybe a tour with Murphy's
Law in August . . we really want to go to Europe this year we are trying to
see if anybody will take us.

-Just have fun with the band and don't take it too seriously and work for
my dad in the off time . and building a recording studio in my garage with
the help of Fletcher.

-Who am i to give people wisdom . I'm making mistakes and learning about
life just like everybody else.

-These were really interesting questions . If the interview makes your
zine could you send it to Epitaph.  thanks for the support and i hope you
like the album . Drop me a line and give me a HONEST review . Don't worry !