History?
-TI: Well, the band was formed by Phillip in 1992. There have been a ton of members since the band was formed. The current line-up has been together for the past four years and is the same line-up that has appeared on all the albums. For a complete history you might want to check out http://www.teenidols.net.

Please tell me a little about every member, age, family, interests, bad things about every member and so on?
-TI: I'm Matt and I play the drums. I'm 25, love buying records and worry too much.  Keith is the singer and is also 25. He likes playing hockey and golf and eats too much mustard and garlic.  Heather plays bass and sings. She's 22 likes having a lot fun and riding horses and she never wants to leave. Phillip plays guitar and sings also. He's 28 likes playing video games and drives too damn fast!!!!

Do you feel like Teen Idols?
TI: Not really? Maybe if we looked like N'Sync or Backstreet Boys.

How does the avreage fan look like?
-TI: Most of our fans look like typical teenagers. But at almost every show we get at least a few greaser punks. That's pretty cool.

How is a good gig with Teen idols?
-TI: A good show for us is just a fun show. A bunch of people packed in a small club dancing and drinking way too much. We like to see people having fun.

Have you been to Europe and played, what´s the difference to play here and there?
-TI: Yes, we've been to Europe twice, once with NOFX and once by ourselves. Well, here in the U.S. more people know who we are. There really isn't too much of a difference between the crowds though.

Do you have good contact with your fans? In which way?
-TI: Yeah, we have a great relationship with our fans. We always go out of our way to make sure we get a chance to talk to our fans before and after the show. After all, they are the people making it possible for us to tour and make records.

What do you mean with Full leather Jacket(the name I mean)?
-TI: It's just a take off of the movie Full Metal Jacket. We just thought it was kind of funny.

Are you satsfied with the new CD? What could you have done better?
-TI: Yes, we love Full Leather Jacket. We think this is our best record yet. There are a couple little things I would have liked to play better on the drums. I'm not really sure if anyone else has any complaints. 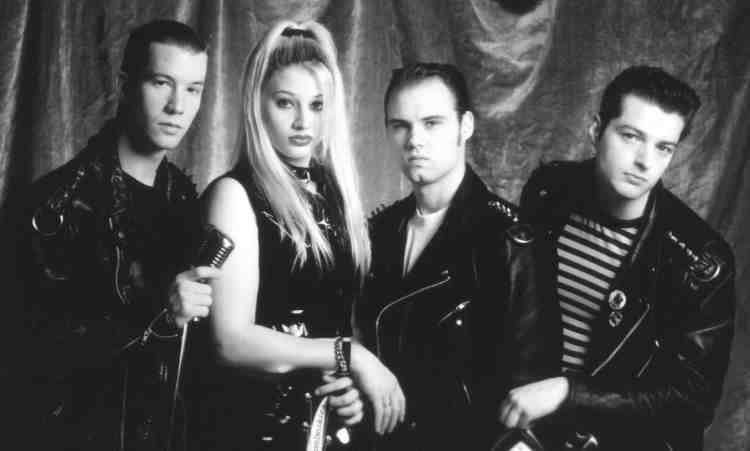 Is a producer important for the music, can he change something?
-TI: For us, Mass is like our fifth member. He just knows what we want to sound like. Yes, he can change something. If he has an idea, we'll try it  and see what we like best. I think it's good to have an outside ear when your recording, the producer might hear something totally different that the band never would've thought of.

When you get reviews ,what do you get compared with?
-TI: We never really get compared to one band. Once in a while we get compared to Screeching Weasel, Ramones or Green Day. But honestly, I don't  think we sound like any of them.

Do you care about reviews?
-TI: I used to. Now I just read it and laugh if it's bad. It's still nice to read the good ones though.

Have you changed something after a bad review?
-TI:No.

You´re on Honest Don´s is it a good label?
-TI: Yeah, Honest Don's is awesome. Everyone there is super and we get to be label mates with a lot of great bands.

You wree on a bigger label before,wasn´t you, if it was the case what's the difference?
-TI: No, Honest Don's is the only label we've ever been on.

What do you know about Sweden?
-TI: Not really too much. I hope we get to play there on our next tour though.

Have you heard any swedish bands?
-TI: Not really.  I'd like to hear some.

How is the punkscene in USA right now?
-TI: The scene here has gotten a lot smaller in the past few years. It seems  like kids here want to listen to Korn more than punk!

Is there any good bands there?
-TI: Yes. Right now there are a ton of good bands over here. Dillinger 4, Lillingtons, Enemy You, The Boils, One Man Army. The list goes on and on.

How is it to live in USA right now, is it violent?
-TI: It's pretty cool over here. The only violence is normally in the big cities like L.A. , New York or Chicago. Overall, it's pretty calm.

We see some talkshows over here like Ricki Lake, Jenny Jones and that stuff, and people seems to be so stupoid in that program, what do you think about the programs and the people in it?
-TI: Most of the people on those shows are actors! I can't even watch those shows anymore. The people are pretty annoying!

You have an own website, is it important and who does it?
-TI: Yes we have a site. It's http://www.teenidols.net and our friend Mass is updating it.

What do you think of the new way to communicate with email and internet and that stuff?
-TI: I love it. It's a lot cheaper than a long distance phone bill.

Do you have any favoruite site on the net?
-TI:Probably punkbands.com.

31.Idols when you were small?
-TI: Mike Schmidt (Baseball Player)

Something to add?
-TI: Thanks for the interview. To check up on other Teen Idols info, check out http://www.teenidols.net . If you can't find our records, request your local record store to order them. Check out http://www.honestdons.com for some other great bands.