-Jake-23-I run "Charged Records" a streetpunk label for U.S. punk/oi
bands.
Jorge-?-He makes punk videos on his "Para Punx" video label.
Meggers -24-He works sometimes but he likes to be a bum with his
girlfriend.
Rick -22- He just became a part time bartender so he probably drinks
allot.

For the punk and Stay out of Order is the one that I have with you, have you done some more and how can I get it?

-We have released a 2nd lp/cd after "For The Punx" but before "Stay Out Of
Order" it is called "Underground Army also we have a new single called  "Who's in Control" with 3 new songs and if you like our old stuff you can pick up
"The Early Years" LP/CD all of which are available from Punkcore Records.

You look really punkish, is it important to do that when you play this sort of music?

-We think it is important for us because it is a way of life for us. We
know that not everyone wants to look punk, but for us it is an everyday thing.

-Punk for me means no rules, have fun, have a laugh, do what you want
to do in life coz we don't have that long to make our mark on society.

-Well I think most kids that like the Casualties are like us and they
find that they enjoy the music but also see punx like themselves so they
relate more. Also there's allot of people that like us that don't look
punk,sometimes hardcore fans and thats o.k. too.

Do you have good contact with your fans, in which way

-We think our message about everyday life instead of boring politics
conects with our fans so they have allot in common with us and we don't
act like  rockstars we are the same people as our fans.

What doy ou think about the new way to communicate with email and all the at stuff?

-I think e-mail is great it is cheaper than the phone and it brings the
whole punk scene together. You can check out bands from all over the
world with the internet, the only thing I don't like is the chat rooms because
people talk too much shit about everything.

Any favoruite site except www.surf.to/skrutt

Do youhave an own homesite, is it important to have it?

-Yes I have one for my label www.chargedrecords.com it is important
because it keeps punx and skins informed of what is on the label and
what is coming out . 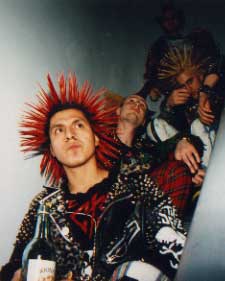 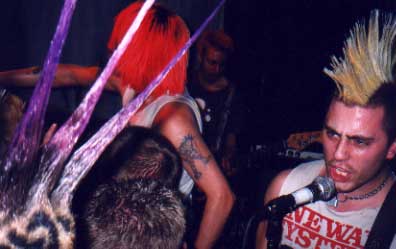 How is a good gig with Casualties

-I think it's a good gig when everyone has a drink, a good time, when they
go for a pogo, when they buy a record off the band and maybe some pretty
girls to be with hee hee.

Are you often out and play

-The Casualties play out allot . Ever summer we do a 2 month U.S.A.
tour and we have been to Europe 2 times each time for a month.We have also
been to Japan for 2 weeks.

Is Punkcore a good label?

-Punkcore is a good label, Dave is honest with us and gives the
Casualties allot of support if it wasn't for him the band would be broken up along
time ago.

Whats the best and whats the worst of being in a band?

-The best thing about being in a band is traveling the world and
seeing how other punx/ oi scene is and having kids really like your records.
The worst thing is when your band doesn't get along and when your
singer leaves you in the middle of a tour!!

Why this sort of music?

-Punk Rock is the Best kind of music and we wouldn't have it any other
way.

Which band are you beoing compared with in reviews?

-Exploited and G.B.H. and The Skeptix.

Do you care about reviews, have you anytime changed anything after a bad review?

-I like to see the reviews for what they say but I don't really care
about them, they never change us or what we do!

Whihc si the worst review you have got?

-A review of "For The Punx" that only talked about our hair and said
that we sounded like straight edge bands ha ha. 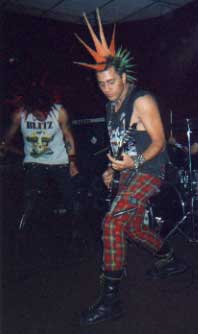 The firsta nd the latest record you have bought,a dn the most expensive?

-When I was getting into punk Wattie from the Exploited, Colin from
G.B.H. and Sid from the Sex Pistols.

-I know it's cold allot, you have nice girls with big lips and tits!!
Also I have allot of good punk records from Sweden like ASTA KASK, T.S.T. and
CHARTA 77 early stuff. SWEDEN'S A.O.K. with me I love it!! Kisses.

Is it any good bands in USA right now?

-The bands the Casualties like right now are The Lower Class Brats,
The Virus, The Unseen,The Strap Onz, Onward To Mayham.

How is the punkscene there right now?

-New York isn't doing to good but every where eles is good on the east
coast and the West Coast has a good scene as well with bands like Clit 45.

Which is most important to have a refrain which people remember, a good m lyric or good music?

-Well we try to get all 3 but as long as the music and the chorus is
good that is all that matters.

Which is the question you don´t get and you want to ahve, please ask it and answer it?

-We don't get allot of interviews. 32 Questions is a long interview ya
bastards!! hee hee

-I will keep releasing great punk rock records on Charged and in my
near future I see me getting drunk in Philadelphia this weekend!!

-The Casualties will play H.I.T.Smoke in London U.K. Nov. 26th. and
then a small 12 day North East American Tour and after that a new single?