History?
-I (Kim ) and Erik was having a party many times together two years ago and we found out that we liked the same groups( The Clash, Ramones,
Rancid), so we decided to start a group. We took B-Boy on bass, he was named Andreas before he came with us in Blisterhead and Karl on drums. After some rehearsals we noticed that this things really was something to make something of. For a year ago we recorded our first demo, The hooligans are here. Right now we´re doing our new demo which gonna be named The sound of Unity. In the beginning we didn´t play so much out but we´re doing it more and more.

Please tell me something about every member?
-Erik= Plays guitar and sing in Blisterhead. He is 21 years old he´s coming from the "worlds biggest town Skövde" He is a really fun bloke and he´s always doing something fun. He works as a soundengineer on the theatre in Skövde. His interests is being out on the town and do funny things and to listen to records. He´s favouriteprogram on TV is Our best years. It says a lot of that guy.
B-Boy= He´s doing chorus and plays bass. he is 19 years old; I think; and he´s in school and read media. He have most Clash-tattoos in the band.
Johan K= Is standin drummer in the band. And he study to be a teacher and he lives in Falköping. When he don´t play with us he plays in Moo Pedo orchestra.
Sings fucking good.
Karl= Is our drummer and he do very good chorus. He was on our first demo and he´s on our second too which isn´t ready to be released yet. He´s 21 years and he lives right now in Norway, it´s therefore he don´t play with us right now.
Kim= I´m 21 years and I play the guitar and sings in Blisterhead. I work as a teacher on a school. My interests is records, Blisterhead, football and the Clash. 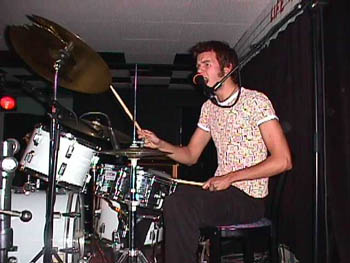 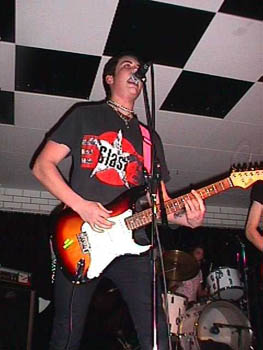 How was the feeling being on Skrutts homeburned compilation record?
-It´s very funny to be on the record and I hope the people who hear our songs feels the same. It´s a good way to push for a band which you like.

What do you like those compilations?
-I think it´s very funny with compilations but often it sin´t all band who hold the high quality which you want them to have. On this record it´s many good bands like The Agents,
Sengaija, Clockwork Crew and of course Dogshit Sandwich.

You said you haven´t got so good critics, what have people written then?
-I think I have lied a little when I said that Blisterhead don´t get so good criticism. But the fact that we have sent our demo to many labels and we haven´t released a record yet. No, to be serious we heva ebegin to get very good critic on our gigs. And you wrote good about us and it was fun. And I sent a demo to Sörling on Close Up and he said that he liked it. and that demo was named this numbers demo.

Do you care if you get bad critics?
-Both . If somebody come foreward to us and say that we´re really bad and thinks we is a punkband among others, then you get touched for about 15 seconds. But after that we think after and says that that human being have so fucking wrong, because we´re a fcuking good band; ithink. It maybe can sound as we´re to much thinking about our ego. But if you don´t like your own music how could any other person do that. 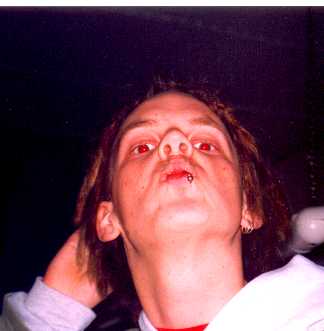 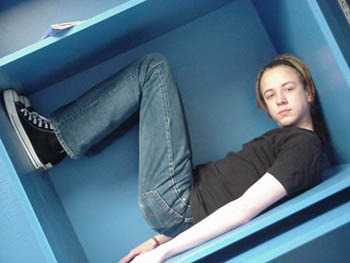 Whate are you being compared to?
-We´re used to be compared to The Clash and Rancid. No other bands.

Blisterhead ,where does the name come from?
-Erik was at home and he looked in an old english lexicon. he found the word Blisterhead which is slanf for a policeman on scooter.

I know that Erik plays in Agents, do you other have any bands bside Blisterhead?
-I and Erik is punktroubadours. We do Clash,Ramones,Rancid-songs.
B-Boy is also a troubadour but he does more  rock´n´roll. Johan plays drums in the skapunkband  Moo Pedo Orqustra. Which is Falköpings best band after us.

What do you like musiclife in your hometown and in Sweden?
-In Falköping there´s many good bands like Sengaija, The Mop Tops, The
Liptones, Bastards F.C, Hell´n´Diesel, Beneath and so on. There is many places to play right now and the band in Falköping holds very high class.
In Sweden it´s really good musiclife and bands like Randy, The Hives and other bands does it very fun to go on gigs in Sweden right now.


First, last and most expensive record you ever bought?
-The first record was a  Stones-record. The last one was Weezers latest and it´s fucking good. The most expensive is a Clashrecord I bought.

Idols when you were small?
-Eddy Grant, The Clash, Dad.

VWhat do you like the new way to communicate with email and internet and all that?
-I think it´s a very easy way to communicate but it feels so on the surface sometimes. And it cab be a lot of work if you want to come out with your stuff. You must do a fine website and answer mail and that sort of things. But of course it´s better sometimes. You musn´t send many snailmails.

Any favouritesite on the net?
-www.listen.to/blisterhead
It soon gonna be updated.

Do you read any zines on the net, any favourites on paper or on the net?
-My favourites are, Higher Quest,Pie Mag and of course Skrutt. It was a long time ago when I bought a lot of zines and now it´s not so many. Zines on the net I don´t read so often.


When you write music, is it most important to have a refrain that people remember, or a good lyric or a good melody?
-The music is most important I think, but of course it´s the lyrics important in a way. We haven´t the idea that the lyric must be political, we only write about the things we want to write about. It´s important that a lyric which nobody feels it wrong and if other people like it´s great too....


Who does the music, is it only one person or how is it?
-It´s Erik and I who does all music and lyrics, but everyone in Blisterhead arrange it. It´s not so that I come with a song which is finished we makes it together and do the chorus together and so.

Streetpunk is this called and it´s close to oi  and oi was related to fascism sometimes, what´s your point of view on that?
-We think that this is really ridicilous that it´s close to rascism sometimes. We don´t see us like a oi band or a streetpunkband , we see us more like a punkband.

What shall we do to the rascism?
-Inform, agitate, demonstarte and not ignore.

VWhat do you think about living in Sweden?
-I think it´s really good to live in Sweden. It´s a nice country and there´s a lot of good bands here.

Politic and music, goes it hand in hand?
-If you want it to go hand in hand it´s OK for me but don´t you not want that you can give the fuck about some of them. I think it´s too many punkbands which write political lyrics only because it´s gonna be that way. I don´t care if our lyrics is poltical or not , only that we feel for them. And then if somebody comes along to us and says that you´re not a punkband becasue you don´t write about politics, then we´re not a punkband. Shit the same ,we play and play the way we like it.

Can music change anybodys life?
-My life have taken a different way if I don´t haven´t played rock. Much of your thoughts comes through you have met other musicans, listen to records and so on. v


What does punk mean to you, is it only a word, or is it a way to live?
-Punk have meant a lot to me through the years, so you can say that punk have formed my thoughts, my way to live and what I do on my spare time. The thing I´m think is special with punk is the energy, happiness and feeling.

Futureplans for yourself?
-I don´t really know. I´m thinking of mocing to another town and start to read to something, but I choose to stay in the town and play with Blisterhead. You can say that my futureplans is the same as Blsiterheads.

Futureplans for the band?
-We´re going on a little tour to Norway in august with Dogshit Sandwich. We´re going to release a split 7 with the same band. We´re releasing our new demo in the summer called " The Sound
Of Unity", and we hope there is someone who is wanting to release our stuff. It´s going to be some gigs after the summer I believe. The futureplans is to rehearsal and play as much as possible. Release a record with the songs we have recorded right now.

Something to add?
-Do you want us to play on your punkplace,just only order a demo , do an interview mail us on . blisterhead@hotmail.com or
www.listen.to.blisterhead